Lord, Help me to be a Mary

38AS JESUS AND his disciples were on their way, he came to a village where a woman named Martha opened her home to him.39 She had a sister called Mary, who sat at the Lord’s feet listening to what he said.40 But Martha was distracted by all the preparations that had to be made. She came to him and asked, “Lord, don’t you care that my sister has left me to do the work by myself? Tell her to help me!”

41″Martha, Martha,” the Lord answered, “you are worried and upset about many things,42 but only one thing is needed. Mary has chosen what is better, and it will not be taken away from her.” 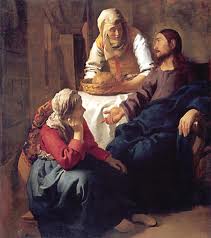 In this passage, we have the story of Mary and Martha.  The fact that a woman can be portrayed in such a positive light, as one worthy to sit at the Master’s feet, is significant in a first-century culture where women were often deemed unworthy of receiving instruction.  Grace knows no boundaries of gender.  The openness of the Lord to cross gender and social barriers is instructive for us, for often such barriers become obstacles to potential ministry.  The Lord was willing to teach all, and so should we.

This text is not just about the role or status of women, but about discipleship.  Yet the fact that Jesus pictures women as disciples shows that they are treated with respect as people and as full disciples.  In a culture that tended to regard women as little more than children, this is a significant step by itself.  Luke has several accounts that highlight the value of women to the cause of Jesus (see ch. 1 and 8:1 – 3).  Today the gender battle is often fought in a different way, as opportunities open up for women that were unthinkable in the first century.  Men and women are almost at war.  This is most unfortunate, for Jesus foresaw a time when men and women would both contribute to the cause of Christ, working together rather than fighting for power.  When service is elevated to its proper place in discipleship, then battles over power become less relevant.  Thus Mary’s sitting at the feet of Jesus portrays a person willing to learn from him, while Martha’s busyness pictures someone serving him.  Disciples need to do both.

From the standpoint of Mary emerges the example of someone willing to sit at Jesus’ feet and fellowship with him as his disciple.  There is something tranquil in what Mary does.  Often in the hustle and bustle of life, we need to pause for a moment of reflection before the Lord.  Jesus’ emotion-filled reply to Martha, speaking her name twice, indicates just how appropriate it is for this sister to sit before him.  She has chosen a needful thing, a good thing, that will meet with her reward for time well spent with him.  Discipleship sometimes requires that tasks be suspended while fellowship is maintained.

I (Joel) am definitely the busy body.  I need to make plans for an event and work rediculously hard to get everything accomplished for the task at hand and make sure it is done perfectly.  If someone is not doing their part in making the preparations, I am quick to judge, as Martha does.  It only helps that our Western-culture mindset applauds this type personality and effort.

Unfortunately, as those who are married know, the person you are most quickly to judge is sadly the person you are closest to, so I’m sorry to say that Kim too often receives my Martha-type judgements.  How quickly I forget how she is the leader in our family in depth of spirituality: basking in the glory of God, thanking Him for his goodness to us, seeing God’s work in the common every day activities, ensuring that Simeon receives the same type love that we receive from the Father.

Dear Heavenly Father, in this day, forgive me for my shortcomings with my wife, help me to be a better husband, and teach me to be a disciple like Mary.