Yesterday (Dec 17), we made another trip to Santo Domingo for our 2nd wedding since we’ve been here.  This wedding was for Ruben and Omparo’s 2nd daughter, Mayra.  This was quite an experience for us since we were asked to be the godparents for Mayra’s fiance, Javier.  We didn’t exactly know what this would entail, and kind of found out the responsibilities as they came up during the wedding.  Our names were announced as part of the ‘party’ that walked down the aisle before the bride.  We were asked to sit up front-with the parents of the bride and groom (although we sat on the wrong side). Joel was asked (with the other godfather) to help place a rope around the couple before they were pronounced husband and wife.  Joel (and luckily the other godfather) didn’t exactly know what to do, but it all worked out.  Toward the end of the service, we the godparents as well as the parents were asked to come up and pray for the couple.  This was a very special time and it meant a lot for us to be involved.   Joel was asked in advance to say a few words and found out before he was getting ready to give his words that it would be a toast!  HA!  No pressure!  All in all, it was quite an experience, but one we very much enjoyed and were honored to be a part of.  We were able to meet Javier’s family (includying 12 + brothers and sisters) as well as his father (we know his mother from working in the kitchen at the camp).  Please pray for us as we take on the responsibility of godparents (even though a little later in life).  We hope God can use us to be an encouraging and uplifting force in their life as they embark on this new adventure together. 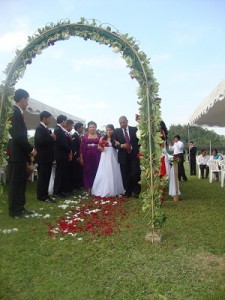 Ruben, Omparo and Mayra walking down the aisle 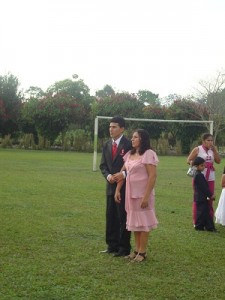 Javier and his mother 'Lupe' 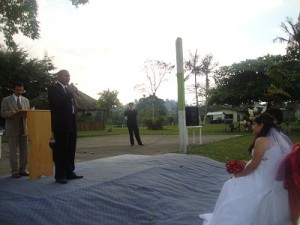 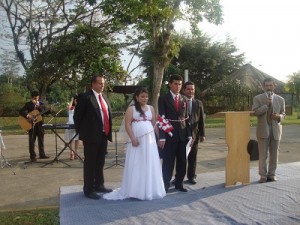 After the rope was placed around the couple 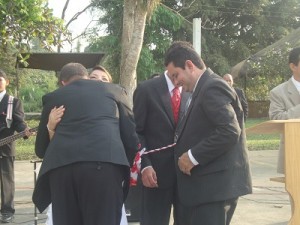 Hugs after the ceremony 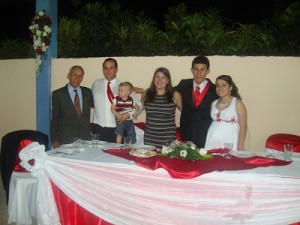 All of the family Delp with Javier, Mayra and Javier's father