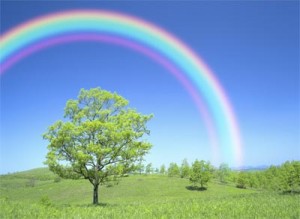 I am not much of one who searches for “signs” from God in life’s circumstances and through nature, which could be to my fault, but God spoke to me through a “sign” yesterday.

Kim and I have been going through a little bit of rough patch recently… not anything with us as a couple or not anything big like difficulties with the national church here in Ecuador.  Just kind of numerous things that have been seemingly stacking up against us and causing us problems.  Of course, we have been taking these matters to heart and to God in prayer and scripture.  But as you know, sometimes these periods last longer than others do.

As you all have read, we (being Simeon and I) had an important meeting to attend in the jungle yesterday as that was where the Administrative Councils of the National church were meeting for this month’s monthly meetings.  We were hoping that we would be able to discuss the future Center for At Risk Children and Medical Clinic to see what decisions could be made and what direction we could be given.  We were hoping that, specifically, they would decide where they would like to have future ministry be located.  It has been over a year since we have begun talking with the leadership of I.P.E.E. (the Covenant National Church of Ecuador) about this question and many others.  It was because of this question that they decided that we should do the Field Study so that way research could be done on the determining a location.  We have felt good about everything I.P.E.E. has wanted us to do but also with the planning of our departure for Home Assignment we were needing to get to the point where some decisions could be made.

All of that to explain everything leading up to yesterday, Saturday’s Council meeting.  I had brought together all of the information that we had collected along the way, the original report that F.A.C.E. compiled, the original proposal that F.A.C.E. wrote, a report on statistics here in Ecuador and finally the report on the Field Study that we had written.  The members of the Council took all of these to heart and read through them carefully and then we went through a process of talking about all 6 of the Districts of I.P.E.E. churches and their pluses and minuses and narrowed them down to 4 areas that would be best.  The North District (which includes the city of Ibarra and everything north of there), the Quechua District (which includes the city of Cayambe and the surrounding area), the Northern Coast District (which includes the cities of Manta and Montecristi and the surrounding area) and the city of Santo Domingo and it’s surrounding area.  After further lengthy discussions, we narrowed them down to two areas: Santo Domingo and a location between the North District and the Quechua District (precisely Otovalo) where those two districts could collaborate together to support the future ministry.  In deciding between these two areas, it was a quite a lengthy discussion.  We talked about the needs of children in those areas, the climate in both areas, the strength of the support churches in the areas, the ease of traveling to each location,  and several factors that pertained.  After this lengthy discussion, they took a vote and 8 to 1 they voted in favor of the ministry being a shared ministry of the North District and the Quechua District and we’ll look to see if it can be located in the city of Otovalo.

We are really excited about this decision!  We feel like the will of God has been shown to us through the strong and capable leadership of the National Church and their well-thought out decision making process.  We just feel honored that we could be a part of it.

Now, back to the first part of this post.  I have always enjoyed rainbows, as I am sure many do.  I am always reminded of God’s promise to Noah and all of us through the rainbow, whenever I see one.  I see it as a way of God reminding us that He is a part of the world, of nature and our lives.

Well, yesterday when Simeon and I were traveling back from the jungle to our home in Quito, we were driving by a vast ravine covered in trees.  It was raining but there was a lot of sun just a head so I thought to myself, I wonder if there is a rainbow around.  So, I looked to my side (while still keeping my eyes on the road mom!) and there was a huge one right next to me.  It traversed from behind me and plunged down deep into the ravine.  It was beautiful!  As I checked it numerous times, I noticed that it was traveling also.  It was actually coming right along beside me.  In that instant, God spoke to me.  Of course, I was feeling overjoyed by the decision that was made and by seeing this rainbow but God spoke to me through it telling me that, just like the footprints in the sand, “Joel, through all your difficulties and pains, I’ve been traveling along right beside you this whole time.”  So, no, it wasn’t an audible voice and the scientific part of my brain would just tell me that I’m sure every rainbow appears like it’s moving when you are moving.  But all of that doesn’t matter because I had never seen a rainbow traveling like that before and God spoke to me right then to tell me that He was near and has always been near.

It doesn’t matter what life and ministry throws your way when you’ve got God right next to you.

Thank you God for your eternal blessings, comfort and love!  I will always be reminded of you and your love through rainbows.

P.S. Kim made it safe to St. Paul, MN yesterday and is having a nice time with family.  She starts class on Monday.