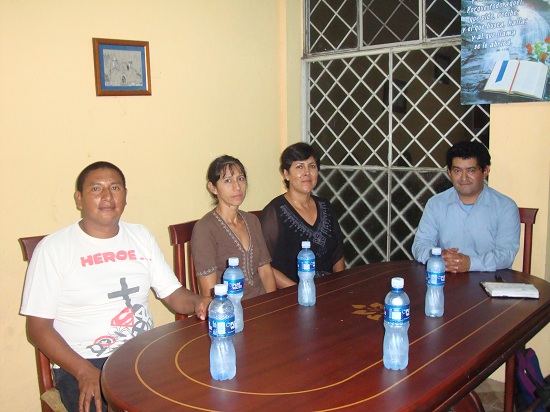 Rueben (left), Edgar (right) and two ladies from the nearby community during our meeting

The family and I (Joel) just got back from a trip to the camp in Santo Domingo.  Thank you for your prayers for safe travel.  All went well in that regard.  With this trip, I was doing some work for the camp, mainly in visiting some other camps in the area as well as some eco-lodges to get an idea as to what they are doing well to attract customers and utilize their facilities.
But another major reason for this trip was that I was to be part of a meeting over “agua potable” for the camp and a nearby community called Santa Marianita de Jesus.  So what is “agua potable”?  Well, it basically translates as “clean water” or we usually say drinkable water.  Currently, the community of Santa Marianita de Jesus (around 300 people), the Covenant Camp, as well as 30 or so neighbors that live nearby but not in a specific community all do not have drinkable water.  The camp has a well and a few of the families in the community have wells but even this water needs to be boiled before it can be consumed.  The only real primary source of water there is in the community is a river that runs through it.  Unfortunately, this water is not consumable but, as you would probably guess, people get thirsty and drink it anyway.  This then leads, of course, to sickness and even more problems.
Well, one of the new roles that Kim and I have taken on is to serve on the Board of Directors of FACE.  FACE stands for “Fundacion Accion Comunal Ecuatoriana” or in English the Community Development Foundation for the Evangelical Covenant Church of Ecuador.  We will be sharing one position but will probably both be attending the meetings.  An example of what FACE does is shown in my recent trip to Pacto Sumaco (see “Pacto Sumaco” post below).  Something else they do is help in bringing basic resources, like clean water, to communities that don’t have it.
The community of Santa Marianita de Jesus has been wanting clean water for some time, as you might expect.  They’ve just been lacking the ability to organize themselves and follow the steps needed to request such a thing.  Then after this is done, the government will have the power to decide what will be done.  It can easily be denied for lack of funds or other such reasons.
The meeting that we had this last Friday night involved myself, Rueben, the Covenant Camp administrator, two ladies from the community, and Edgar, the current president of FACE who is also a local church pastor in Quito.  Edgar will soon be leaving his position as president, so it’s good that I could be there to help with the continuity of the project with the next leadership.  Also, it fits as I am so heavily involved in the work of the Camp.  As you would guess, this will be a great help for the Covenant Camp to have clean water as a part of what it offers to its customers.