Posted by Joel & Kim on March 30, 2012
On Tuesday, after arriving in Quito on Monday evening around 8PM, we left for our final workshop in Tena.  Our plan was to travel all the way to Tena on Tuesday, but we had a slight delay because of a mudslide.  We ended up just staying in Baeza overnight and leaving early in the morning on Tuesday for Tena.   This week, our friend and fellow short-term missionary, Mandy Hjelm came with us again to help translate.  This week we discussed infection and co-infection with HIV/AIDS and with this I did a general overview of infection.  In this, we discussed bacteria, germs, viruses, protozoa and fungi.  We also discussed adherence to HIV/AIDS treatments.   Since a lot of medications given for HIV/AIDS treatment are many and complicated, it is not always easy to adhere to the plans given.  I tried to simulate this by giving the kids ‘medications’ (which were really chocolates) to simulate taking medicines during a 24 hour period.
The 3rd thing we talked about was a general overview of the most common Sexually Transmitted Diseases.  Of course I showed the pictures of each disease, which did gross the kids out, as well as the professors, but hopefully was effective.  To help the kids understand a little bit more about transmission of sexually transmitted infections, including HIV/AIDS, we played a game where each kid received a cup full of candies.  Two volunteers received the same cup, except with instructions not to share their candy with anyone but each other.  Another kid received a cup with instructions not to share his candy at all.  One kid had a different candy which was supposed to simulate HIV or another STD.  During the game, the kids were supposed to trade candy with each other and then write down the names of the people they traded candy with.  After about 10 minutes, we had the kids sit down.  We asked the kids with a different type of candy (in this case we used gummy worms) in their cup to stand up.  We told them that the exchange of candies was supped to simulate having sex.  Anyone that had a gummy worm had HIV or another STD.  Then we had each person stand up that had traded candy with anyone standing.  Eventually everyone was standing except the 2 volunteers (simulating fidelity) and the other (simulating abstinence).  I thought this was a really cool game and I think the kids really enjoyed it.
SO…what are my thoughts about the workshop….
I think overall, the workshop went well.  I think I may have overestimated the amount of information that the kids understood about infection, bacteria, viruses, etc…I think we realized that for the majority of the people attending, even the professors, this was the FIRST time they were hearing about infection, how it’s transmitted, what germs are, etc…
Although their information was limited, they really WANTED to know EVERYTHING about what we were teaching.  That is different from the States.  Although the amount of information that is known about infection and things is higher, the majority of people don’t want to know EVERYTHING.  They just want to know what they need to know.  Mandy and I talked about this and she is the one that brought it up.  It has been a very interesting thing to ponder.
I now understand why the outline for the class was so basic.  At the beginning, I was trying to figure out how to fill 5 hours with ‘what do the initials HIV and AIDS stand for’ and ‘what are HIV and AIDS’.  Now I understand that starting from the beginning is where I should have started.  With basic information.  If I am asked to do this again, I will try to do this.
WHAT DID I LEARN…
I have always wondered in all my years of school, if professors ever learn anything…  I hope they did, because even during this four week workshop, I learned A LOT!
I never would have thought of myself as a professor or teacher.  Nobody really prepares you for that although it is kind of a natural part of the RN or Nurse Practitioner responsibility.  I learned that I am actually pretty good at it.  Not to toot my own horn for sure, but I really tried to put in a lot of activities and games that would help kids learn.  I learn that way, and I am guessing I am not the only one.
However, I realized I have a lot to learn!  I think this is an important part of being a teacher.  It’s good to be open to what you CAN learn and what you can be TAUGHT!  I realized by trying to make the kids come up with their OWN ideas, I was going against the grain a little.  I’m OK with that, but I also need to be aware of this in the future.  Just because we LIKE thinking on our owns as Americans, others in the world may not be as accustomed to it.
All in all, I really enjoyed my time in Tena and I really felt I was HELPING.  That makes me feel useful.
Here are some pictures from our final workshop… 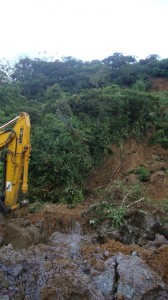 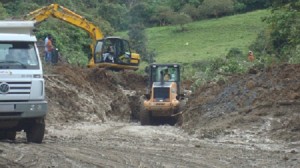 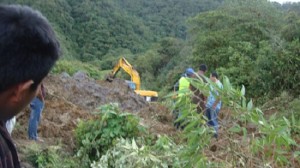 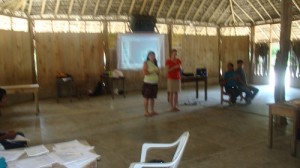 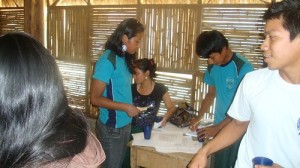 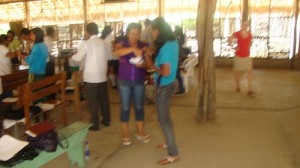 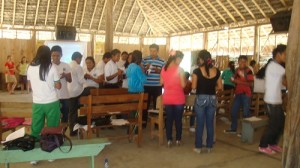 More pictures from the activity from Week 4 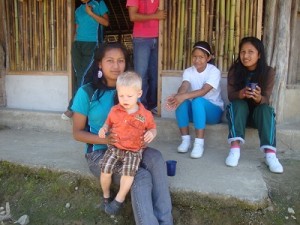 Simeon with friends he made from the workshop