It has been a busy and FULL week, but we are back in Quito and just reminiscing about this week’s workshop over breakfast.  It was definitely a different sort of week for sure.  This week, instead of our friend and fellow short-termer Mandy Hjelm translating, we asked Josh Swenson, another short-term missionary if he would be willing to come and help us out.  He agreed, so this week was different in that sense.

This week, we talked about prevention of HIV/AIDS as well as the rights and responsibilities of those with living HIV/AIDS.  I have to admit, this was a tough week, preparation-wise as I mentioned in another post.  As a representative of F.A.C.E and in-turn, the national church here (IPEE), I naturally asked what they wanted me to teach in terms of prevention.  Most of the current literature and research really pushes condom use and I just wanted to know what the stance of the church was on that.  They really preferred me pushing abstinence and fidelity in marriage-so that is what I did.  I’m not sure why this week was so much harder to prepare for, maybe because the current information I was looking for was all over in English, but difficult to find in Spanish, also, in discussing the rights of patients living with HIV/AIDS, I had a hard time finding info directly for Ecuador.  Whatever it was, God worked through it and the presentation was completed.

One important thing that I really wanted to ‘drive home’ so-to-speak, but the responsibilities of people, living with as well as not living with HIV.  These teenagers, as many teenagers are around the world, I’m sure don’t think directly of the consequences of their action.  I really wanted to stress with the gentlemen their responsibility to protect not only themselves, but the women they are with.  I also wanted to stress with the ladies, that they need to protect themselves because although they would like to think that maybe the men in their lives are thinking only of them, in reality, they aren’t always thinking of how to protect the ladies.  I have noticed that many of the girls in the workshop are very reserved and quiet.  During this class, one girl even said “we don’t have a guy in our group, how are we supposed to answer these questions?”  This made my heart hurt and I really want these girls to be able to think and make decisions for themselves, especially when it comes to sex.  I really stressed to them to think about what they will say and do in risky situations.  I also stressed that they don’t HAVE to have sex just because someone wants them to.  They can say NO!

OK, back to the rest of the workshop…

We discussed prevention and responsibilities and then did a couple of activities.  One activity was to have students come up with phrases or “lines” that people may say to try to get them to have sex.  Then we had them divide into groups and come up with responses to these phrases and situations.  For instance…one example of a line that someone gave was “don’t worry about getting pregnant, you can just have an abortion.”  2 of the students came up and acted out the situation.  They did a really great job and gave great responses such as “I wouldn’t want to kill my baby” or “that is murder”.   However, other groups had a really difficult time with this.  Josh told me that this kind of learning is very difficult because a lot of the education is more ‘whatever the teacher says goes’, they don’t have to think of things themselves.  This is where one of the girls said that they didn’t have a guy in their group to help them.

Another activity was we had cards that said, ‘no risk,’ ‘low risk,’ ‘medium risk’ or ‘high risk.’  We then showed different examples and the students had to decide what type of risk it was.  The winners got homemade chocolate chip cookies!

Here are some pictures of the workshop day… 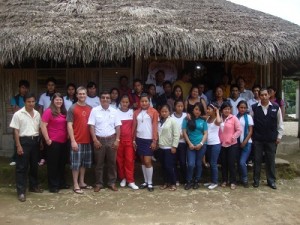 The director of the bilingual school (the one that is working with FACE on this project) came for 5 minutes and took a quick picture with the students and teachers.