We just finished hosting the Vision Team from Evergreen Covenant Church in Sanford, ME.  We had a great time with them.  In the end we visited 7 different possible locations that they could partner with for future ministry.  Six of the seven locations were indigenous churches who held their services in their native tongue (Quichua) as well as in Spanish.  The good thing was that all of the churches were located near or around the Volcano Cayambe, so the traveling wasn’t too, too extensive.  The team, Joel and Henry Burbano were treated very well by all of the churches we visited.  The team even got the opportunity to really experience culture when they were fed Cuy (Guinea pig) a couple of times.  They probably won’t be cooking it up when they get home.

This was a bit of stepping out of my comfort zone (Joel).  I was the translator for the team so while we were out and about I was the one responsible for translating in both directions.  It was definitely good that most everyone spoke Spanish in addition to their native Quichua.  In the end, everything went just fine.  My translations were not always perfect but the main point was always understood.

Now, that they have headed back.  They are going to take all of the information that they have collected and share it with their congregation.  Then from there, as a church body, they are going to pray about the Lord’s leading in which direction to go to form a partnership.  It will be pretty difficult in that so many of the locations were filled with such wonderful people and vision for future ministry.

We finished up our time with them by taking them to historic sites in Quito as well as to the Equator.  We had a great time with a lot of laughs.  One of our highlights is pictured below when one of the churches we visited took us on a horse ride up to the top of a mountain.  It was a pretty cool! 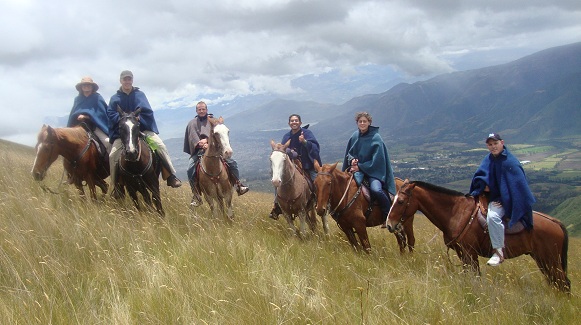