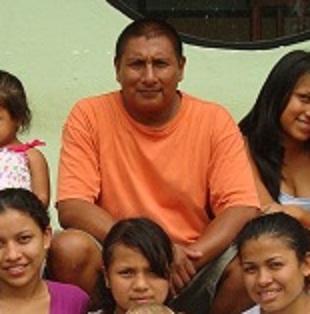 I just got back safely from my recent trip to the Covenant Camp and Santo Domingo and returned very encouraged, so I wanted to share a little bit with you all.  Ruben Rocha (translates Rueben Rock by the way which is very fitting with what I’m about to share), the camp administrator, has a little saying that I have heard him say on several occasions: “con fe.”  It directly translates as “with faith” but we would normally say something like, “I believe such and such will happen because I have faith that God will provide.”  He doesn’t say all of that of course because we know what he means when he says “con fe.”  He uses the saying as a sort of decree or charge to the rest of to “have faith!”  Or maybe to put it into more words, it would be, “I have faith that God will provide, so should you!”

I have seen his faith demonstrated on several occasions and I have seen how God has provided just has he had faith that He would.   To give a few examples, when we were building the new pavilion for the camp (see previous Santo Domingo posts below), the camp actually ran out of money in its bank account.  The accountant for the camp was panicking and asking for a loan from the National Church to cover the remaining funds for the project and to be able to pay the employees salaries for the month.    Ruben responded that “con fe,” God will provide.  And He did.  They received just enough extra groups and bigger groups paying in advance to cover both the remaining costs for the building project as well as the employees salaries for the next month.  They have since recovered with more groups to be far from being in the red.

I have also seen similar type things happen for the family to be able to afford to start their oldest daughter, Liseth, in college.  Ruben also decided to enroll her in classes starting this month not knowing where all the money for tuition would come from.  Well, you guessed it, she has started classes this month and they had just enough to pay for this semester.

Finally, I have also seen his faith and enthusiasm at work in the “agua potable” project (see prior posts below), which by the way I will share about the updates on this project in my next post.  He has been so energetic and enthusiastic with the community that is trying to acquire the clean water that it has rubbed off on everyone.  He repeats his chant of “con fe” and it gets everyone excited.  And I have seen this project move along very quickly and I think a big part of that is Ruben’s energy and enthusiasm.

Now, of course, Ruben is a very humble man and I know if I would be asking him about this post he would say that all credit goes to God and his faith shouldn’t be given credit.  But I think it’s good to show examples of people with a strong faith because they can be an encouragement to us all.  I have been totally encouraged by his faith and so should you!  Maybe there is something to that verse about the mustard seed (Matthew 17:20).