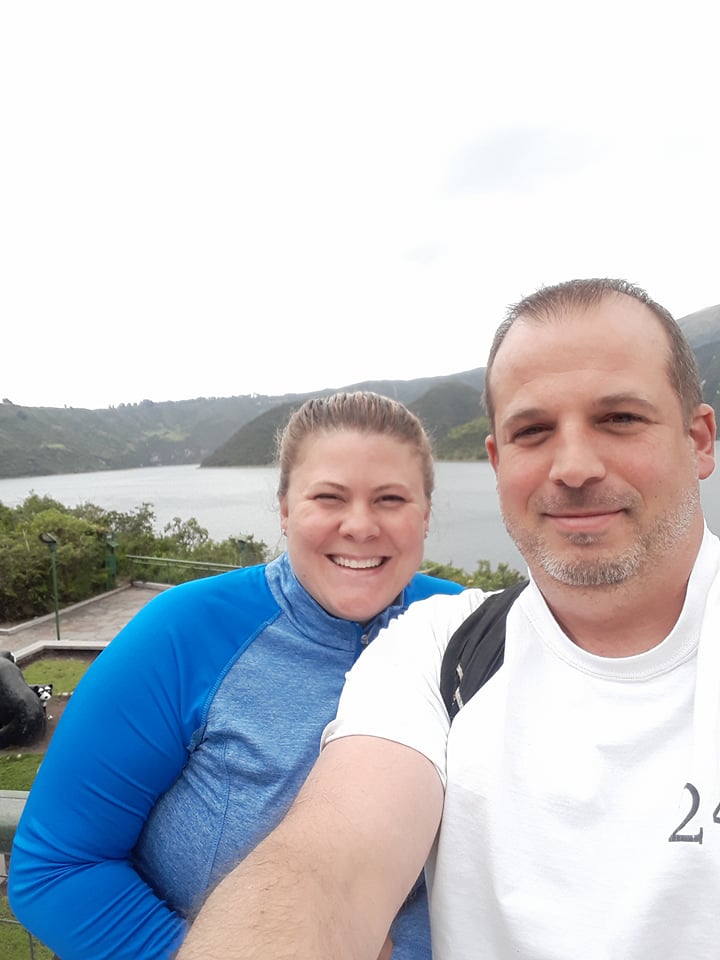 18 give thanks in all circumstances; for this is God’s will for you in Christ Jesus.

As some of you may have seen on social media, Joel and I took a weekend spiritual retreat this past weekend.  I (Kim) haven’t been great about posting a lot of reflections lately about where we are personally, what we experience, etc because although ministry is so important, I think that knowing and having a better glimpse of who we really are is just as important.

We designed the weekend retreat so we could discuss things together and try to hit all the major areas of our life to check in and see how things are going.  It was amazing.  On Friday, when dropping the kids off, I had this weight and incredible worry just hanging over me.  I was trying to discern if it was from God, giving me caution or if it was the enemy.  It was so strong and forceful, something I had never experienced before.  When we arrived close to our destination, there was a rainbow and up until then I still couldn’t discern what I should take from what I was feeling.  But when we pulled in and saw that rainbow, I felt SUCH a sense of peace.  Peace that God was in control, that the kids were in His hands (a much safer place than mine which is a whole other blog post) and that we were doing the right thing by going.  I’m sure I can’t be the only frantic mom who has been in that kind of situation, but I just couldn’t believe how much I was weighted down by it.  As the weekend progressed, it was so obvious that what I had experienced was from the enemy.  On Saturday we decided we were going to hike around a crater lake.  We knew it was a long hike and although we arrived later than we expected, we still wanted to hike.  We hiked the entire 8.4 miles in 5 hours!  It was a pretty big accomplishment, especially for me!  As we walked, we talked just as much and really reflected on this last year.  A lot happened and we reflected on those, the home for at risk children opening, celebrating 15 years of marriage, Simeon asking Jesus in to his heart, buying a house, Esther starting preschool, family things, deaths of friends and family, visits from the States, etc, etc, etc…We realized as we talked that we had not truly allowed ourselves or taken time to reflect and revel in these things.  We continued to walk and realized the overwhelming thankfulness that we felt for all that had happened.  The bad things and the good things.  We realized that God’s faithfulness was so evident in the past year and the past 15!  We took time as we discussed each event from the last year to stop, literally and thank God for these things.  The things we had learned, the things we endured.  We sensed so much how faithful God was in all of it.  We reflected back specifically on the home opening in Cayambe.  We reflected on the last 15 years and how we had felt God had given us this call.  There were SO many times along the way that we wanted to quit, wanted to stop, and most times it would have been easier to do just that.  The significance of the home opening, although we said it in word at the time, was not truly realized until this moment on our hike.  In those moments we wanted to give up, both separately and together, we always came back to our call.  The call we feel God has placed on our lives.  That is what kept us going.  We realize how frail we are and that we are simple midwest people, nothing special about us, but we were so humbled that God allowed us to be a part of this call.  He never said any of it would be easy.  Ministry, missions, the Christian journey is hard.  It’s messy and ugly sometimes.  It hurts.  It’s joy-filled.  But as we experience daily, we aren’t alone.  God has never left us.  He has not called us to something that He won’t walk with us through.  That is exactly what He has done.

We continued to hike and as we looked behind and looked forward on the trail, there were so many parallels for life, marriage, ministry.  There are valleys and there are peaks, joys, difficulties, highs and lows.  Sometimes you know exactly where you are going and exactly where you have been.  Other times, you have no idea where you are going.  You can’t see the path.  Does it go up, does it go down or around.  This is our journey.  But we don’t stop, right?  We move forward because we know God is with us.  We know HE knows the path and THAT. IS. ENOUGH.  Sometimes you keep going and it seems you make NO progress.  You know you aren’t going backwards, but you sure don’t see much progress being made toward the goal.  Life is like that.  It’s another reminder that God sees our every move.  He’s with us in it all even when we feel we are moving backwards.  Sometimes you have to push each other.  As we were walking, Joel had me grab his backpack and helped me up a rough patch.  Another part I was pushing him up a big hill.  Sometimes individually we get discouraged, sometimes we want to stop or turn around or quit.  But for us, when we have faced those times, the other person has lifted the other up.  Surround yourselves with these kind of people.  There are always nay-sayers and negative people, but surround yourselves with people who speak truth and encouragement in to your life and be that person to someone else!

Up on the hike, we struggled with Joel’s phone to find the verse in Philippians about running the race.  As we were walking our own at that very moment, it seemed a very appropriate verse that mirrors our life in marriage, ministry and all that is in between on our journey together.  I love that the heading for chapter 3 in Philippians is “no confidence in the flesh”.  Oh how true that is.  As we walked we realized how truly nothing we are in the big scheme of all of these things.  We are merely flesh and God has allowed us to come along side Him in this journey.  So, we press on and we set goals, and we give thanks and we lament and we allow God to go before us in this journey.  Not because we have any idea what is ahead, but we go forward because we are called to.  We go through the muck and the dirt and the joy and God promises to be with us through it all.  And He is.  Thanks, THANKS be to God for his amazing faithfulness and the evidence of that which He shows us more and more.  Press on!

7 But whatever were gains to me I now consider loss for the sake of Christ. 8 What is more, I consider everything a loss because of the surpassing worth of knowing Christ Jesus my Lord, for whose sake I have lost all things. I consider them garbage, that I may gain Christ9 and be found in him, not having a righteousness of my own that comes from the law, but that which is through faith in[a] Christ—the righteousness that comes from God on the basis of faith. 10 I want to know Christ—yes, to know the power of his resurrection and participation in his sufferings, becoming like him in his death, 11 and so, somehow, attaining to the resurrection from the dead.

12 Not that I have already obtained all this, or have already arrived at my goal, but I press on to take hold of that for which Christ Jesus took hold of me. 13 Brothers and sisters, I do not consider myself yet to have taken hold of it. But one thing I do: Forgetting what is behind and straining toward what is ahead, 14 I press on toward the goal to win the prize for which God has called me heavenward in Christ Jesus.

2 Responses to Press On