Well, we have been extremely busy and haven’t had much time to give updates and post pictures so we are going to try to do a bunch here today to update you on what has been going on with us.

Not sure if you know or not, but we recently moved…. well… kind of.  You see we had been living in a temporary furnished apartment in Quito since we had arrived back in March.  It was a good landing pad for us as we didn’t need to come up with all of our stuff immediately (appliances, furniture, personal belongings, etc).  Also, since the plan was that our container would be arriving in April or May, we could live there until much more of our stuff arrived on the container and we would have more of our stuff for filling our new apartment.  Well, as you know, the second part of that plan did not work out as we had hoped as the container still has not been sent (more on that in a bit) and so we haven’t received our stuff from the States yet.

Nevertheless, the baby is a comin’ and so we needed to figure out where we would be living long-term or short-long-term or basically the next 1 to 2 years of our lives.  We had originally been thinking we would move to Cayambe for a year while Kim would be doing her 1-year rural internship there.  However, since that has not worked out how we have been hoping/planning, we decided to go with Plan “B.”  Plan B is that we decide to get an apartment in North Quito, basically the most northern part of Quito that you can get which is on the way to Cayambe.  In getting an apartment there, we would be able to slip out of Quito quickly (if that’s possible) and travel up to Cayambe in about 45 mins on a  normal traffic day.

So, that is what we have done.  In the beginning of May, we signed a 1-year lease on an apartment in Carcelen Alto, a sector of Quito in the north.  Pictures will come a little bit later.

Our days before we traveled to the States were a bit crazy as we were moving all of our belongings that we have in Ecuador (out of our current apartment and out of storage unit) into our new apartment.  In addition to that, we also were purchasing and having delivered all of our new appliances and furniture for the apartment.  Safe to say it was a lot of work as Joel even pulled an all-nighter one night getting it all done.  There are some before and after pictures below that show the good use of our new van for this process.  Simeon was the photographer on the second one.

So, we are moved into our new apartment… kind of.  Basically, everything is in there, but we still need to unpack and do everything for setting up the place.  It will be a lot of work still but we do really like the place so it should be a lot of fun! 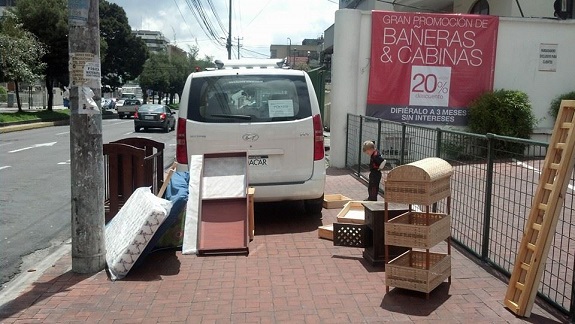 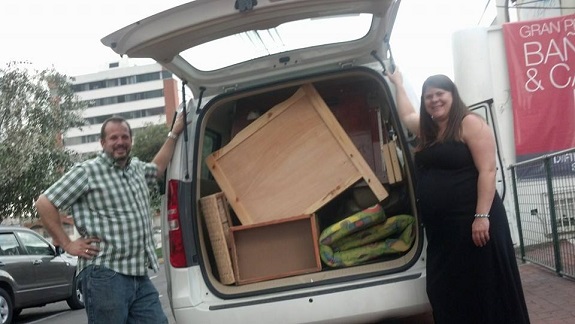