Usually when you remember (for me, usually at the last minute) that you need to renew your license or your license plates or some other yearly type errand, you think to yourself, “Oh, that’s annoying,” and then you go to the office that you need to and get done what needs done.  Or maybe you even send something in the mail or possibly just complete it online. It may take 15 mins or an hour or two and then you’re done.  Then you have the rest of your day is open for grocery shopping, coffee drive-thru and whatever other things that may be needed.  Well, the process here looks a little bit different.  The initial reaction is probably about the same, although with a flood of other frustrations in the back of your mind knowing what is in store.  Processes that need to be completed aren’t quite the same in Ecuador as what they are in the States.  This isn’t meant to be a downer type of post, especially against Ecuador.  There have been many frustrations with the processes here and we now know how to prepare a little bit better for them, then what we were our first go around.  So, please know, I am not giving you these insights out of frustration; rather just to give you a glimpse of how life may be a little different for us here in Ecuador as opposed to people who live elsewhere.

This past week, we have attempted some of these processes.  We thought we would share a little what it is like here so you can understand our lives a little bit better.  This week, we had a few thing on our “To-DO” list.  We needed to register our visas.  This is different than what we have done in the past.  In Chicago, there is an Ecuadorian consulate, so we were able to GET our Visas there and were able to get in the country with those Visas.  However, they then have to be REGISTERED once you are in Ecuador and have 30 days to do this after entering the country.  Probably the most important thing for us has been to purchase a vehicle.  When we came as short termers, we had no issue, because there was already a car for us, but as long term missionaries, we knew we would be purchasing one, a great thing for us, but not as easy to do here as it is in the States.  Did we also mention that currently we reside at the top of a very, VERY BIG hill, and when I say hill, I really mean the EDGE OF A MOUNTAIN.  Not so easy to climb when 7 months pregnant with a 4 year old in tow.  Additionally, we needed to set up an initial OB visit for me as I will be delivering in about 10 weeks or so.   We were also trying to get our cell phone plans here so we can communicate with one another and our friends here.  Of course, this was not of the most critical importance, except trying to communicate plans and such is MUCH easier WITH a cell phone, especially since  we are seemingly always on the go.

For the record, REGISTERING Visas was MUCH easier to do in Ecuador this time around than what we had experienced in the past.  We basically dropped them off at the office, and I will pause here and say that as soon as we walked in the door to stand in the end of the line, we were motioned to the front of the line because we had Simeon and because I’m pregnant.  We were given a priority number and got in to drop off everything within about 20 minutes.  I would say this might normally take more than an hour, if we’re lucky!  So kudos to Ecuador for recognizing carrying a baby and having a child is not so easy to handle in the midst of trying to do Visa work!  THANK YOU!  After they kept 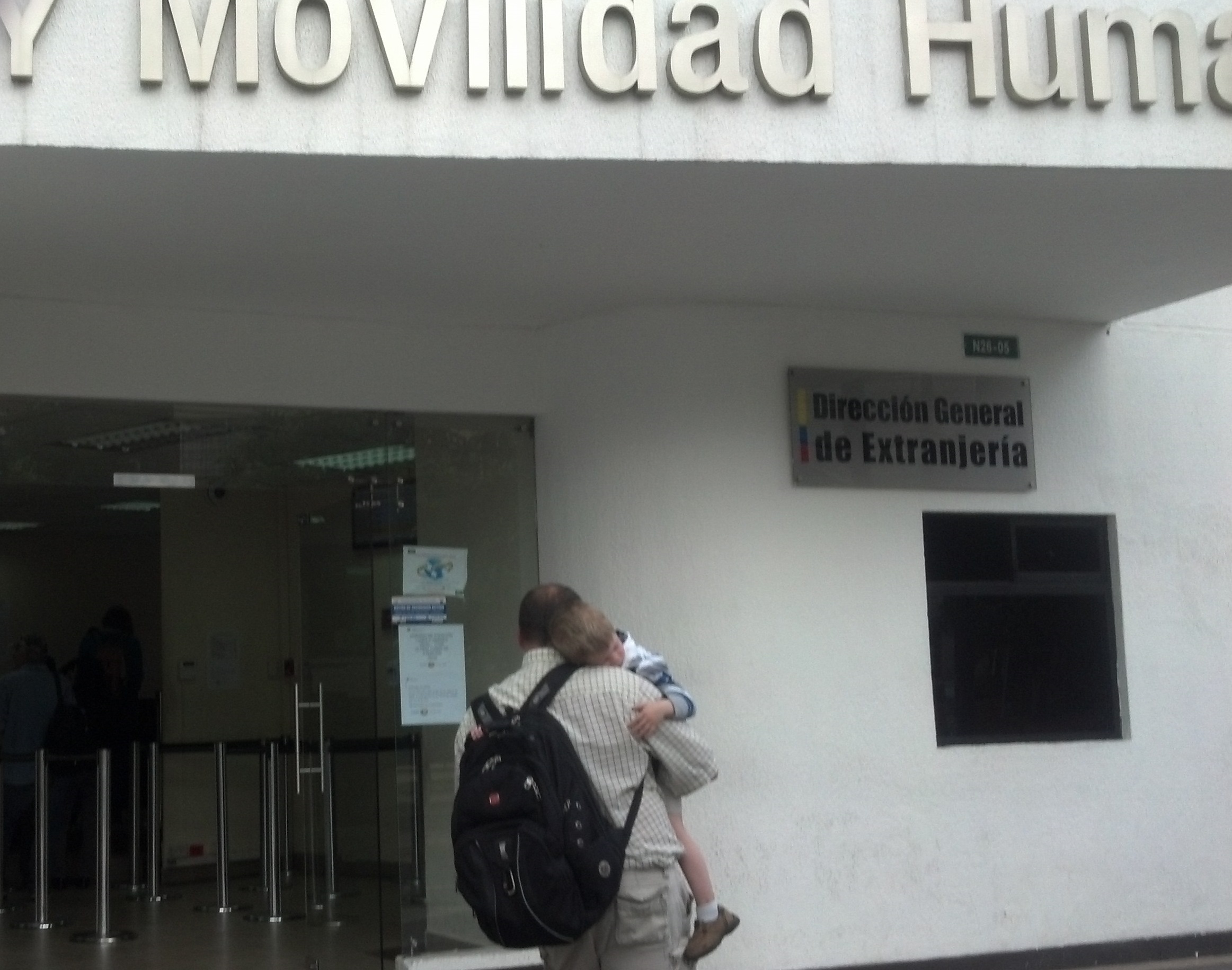 Joel & Simeon going into the office to register our Visas.

our passports for 48 hours, we went back to the same office and were ushered in to a separate office where we were told our Visas would not be ready for another 2 hours.  Simeon was sleeping at the time and Joel told them, OK, we guess we’lll just wait.  We went to sit out with the rest of the people waiting and 3 minutes later they called us back to the special room as the gentlemen was calling his boss to try to rush the paperwork.  Within 5 minutes, the paperwork was done and we were out the door!  WOW, that didn’t seem so bad…and it wasn’t, but we then proceeded to try and get a taxi (STILL pregnant and still with sleeping Simeon) we tried for 20 minutes and even had 2 people beside us that waved down a taxi and subsequently took it while we stood there looking pitiful.  Not everyone is as nice as the Visa office people.  Then it rained.  BUT we did eventually get our taxi, went to the market for fruits and veggies and then returned home with VISAS!

Our OB appointment was another interesting experience.  Because we both don’t know Spanish OB words yet, we thought it might be better for our Spanish teacher to try and call to get an appointment for us.  She kindly agreed.  She called mid-morning and was told (after being transferred about 7 different times) that she would have to call back at noon because the secretary was not in yet.  Promptly at noon she called and was told the Tuesday’s were the day for appointments.  Her understanding was that we would call on Tuesday for an appointment.  This was a little concerning because we didn’t know HOW long it would be after that to actually get the appointment.  SO, she called back, was hung up on twice.  Then I decided to call (yeah, like THAT would help anything) since I was the actual person needing the appointment.  The lady did answer and I said I needed an appointment.  She said “who needs an appointment” and I said “I need an appointment.”  She subsequently scheduled my appointment for this Tuesday at 11AM.  Now how is it that someone who speaks perfect Spanish gets hung up on and when I called I got the appointment?  Well, my guess is she took pity on the fact that I am 30 weeks pregnant with no doctor and my Spanish had a little to be desired.  Whatever it was, I was grateful for the appointment.

The car.  Well, this process has been bigger.  Joel has been out almost every day either by himself or with someone to go to car dealerships to check on cars for the last week.  I won’t pretend I know what all he went through, but I do know that he always came back VERY tired and VERY sweaty! Most days likely from walking the hill or running around getting a taxi.  I think he may have lost about 10 pounds just from that, a lot of this time he also had Simeon with him since I was in Spanish.  The update is that he has negotiated a price for the car we would like.  He went to buy it today and we found out that the bosses who are allowed to sign the paperwork at the bank don’t work on Saturdays’ so we will be waiting until Monday.  And so the process continues.  Simeon keeps asking each time he comes back “Have you found the car yet daddy?”

We COULD go to once place, that is similar to our Super Walmart and get everything we need.  However, for fruits and veggies, you spend 3 times as much and it’s not as good.  So, we go to 2-3 different places.  Our favorite is to go to the fruits and veggies market.  We have a favorite lady that we like to buy veggies from, another lady who sells sweet potatoes (not an easy thing to get here) and another lady who sells fruits and avocados.  There’s also a lady who sells JUST peppers, any peppers you would want!  It’s awesome!  We then make our way over to another supermarket.  This has the majority of everything else we would need, including some imported items from the states.  If we absolutely can’t find something, we go to the equivalent of Super Walmart place to get the other stuff.  Luckily the market and supermarket are next to each other, making the navigation easier for sure!

So, that has been our week.  Are there frustrations, OF COURSE, but are we adjusting to them, YES!  It helps to have been here before and it helps to see familiar faces, at the market, at restaurants, etc and we are grateful for small differences here that make our lives easier (i.e. being pregnant and having a child gets you in most places quicker)! 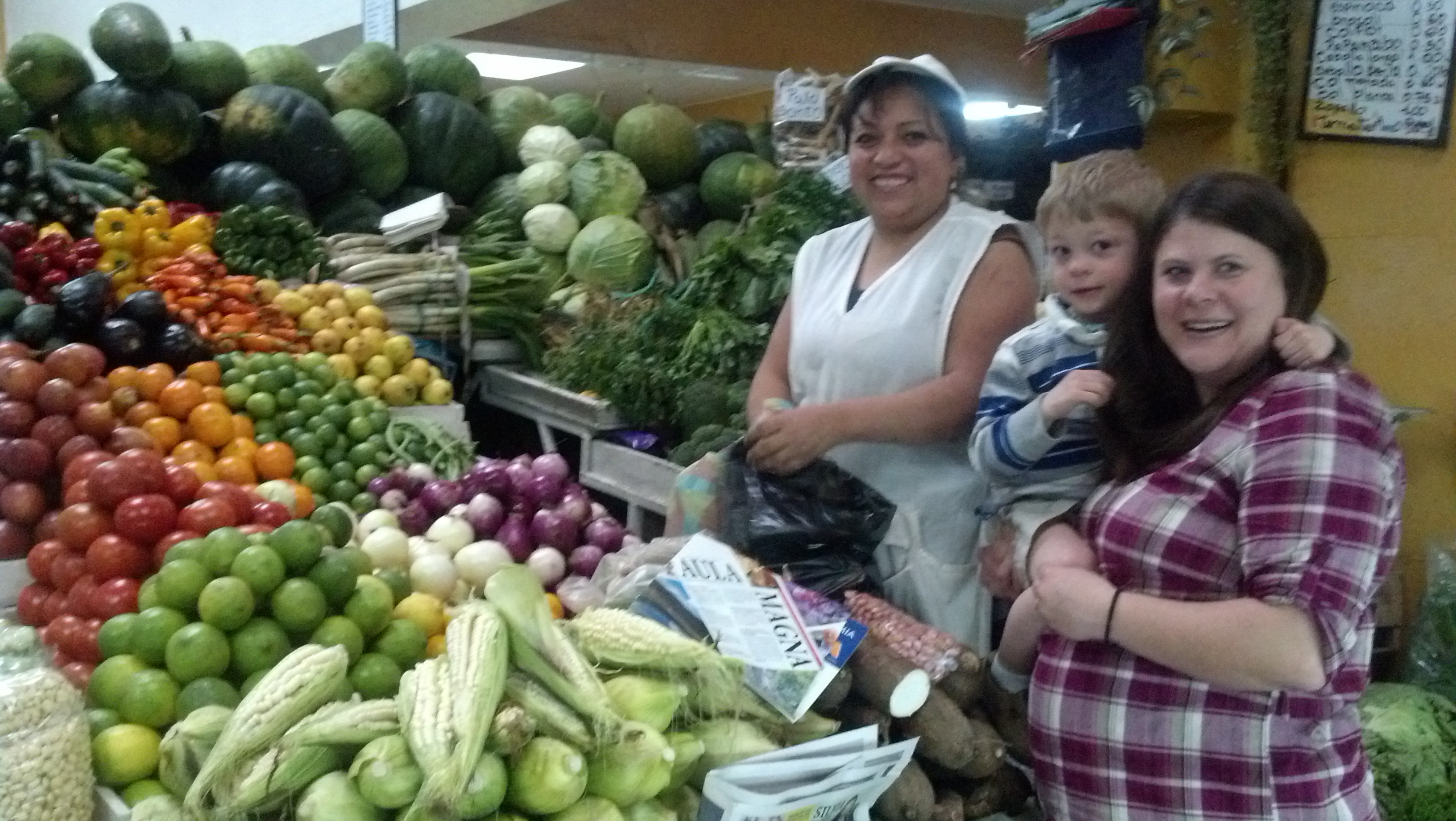 Us at the market with our favorite vegetable lady! She’s so nice!

One Response to The Process