We have a huge answer to prayer to share with you all.

For some of you that are newer to following our ministry, your immediate reaction maybe “huh???”  But others that have known us for a long time know this as a long-standing prayer request.

Here’s the deal: The beauty of a house (sarcasm intended) pictured below was purchased by me (Joel) in 2000 in Marion, IN as an initial home/renovation project.  I lived in it for only a little over  year before I felt the call to start Seminary and moved to Chicago.  During that year, I poured a lot of time and work into it to get it fixed up and it was actually in fairly decent shape considering what it had started out as.  At that time, I decided to rent it out to Indiana Wesleyan college students to see if it could be a profitable business for me.

I was able to rent it out for a little while and make a little bit of money off it.  However, I learned quickly that in a couple of years by not living in Marion, it was very hard to keep the tenants happy and  them paying on-time.  I did eventually have a rental manager that was able to help me but over time, I realized that with all of the expenses I was having, I was turning very little profit.  And it was just a lot of work and stress trying to deal with issues with the house, especially when I didn’t living in Marion.

It quickly became obvious to me that I needed to get out of the rental business; that it wasn’t for me so I decided to try to sell it.  Well, one big thing that I haven’t shared yet happened during the course of me renting it out: the housing market collapsed.  I found out very quickly that I couldn’t sell it even if I wanted to.  The only people that I could find that were interested were folks that wanted to make a quick buck off my misfortune.  The biggest offer I received for the house was $3,000.  Now, I did only pay $15,0000 for it but that was a huge loss to take, especially with someone with so little money to begin with.

So, I decided to hold on to it longer and try to rent it out longer to try to give the business aspect to it another shot.  And I did find a professional rental manager that was able to help me out.  But really, in the end, the same story ensued.  We had a lot of problems with the renters (one time a drug bust actually occurred in the house) and every year, very little, if any, money was being made.  The house continued to deteriorate and we were making very little money off of it.

This continued all the way up through when we returned from Ecuador.  After coming back from Ecuador for our first Home Assignment, the house was vacant and so I decided to go take  a look at it to try to figure out what to do with it.  I was shocked to see what had become of it.  When walking in it for the first time, I was actually reminded of when I first purchased it and the condition that it was in.  It had really gotten into terrible shape and I said to myself that “I couldn’t let anyone live in this house.”  I’m not a slumlord!  I decided that I had to do one of two things: 1) get rid of the house and cut my losses or 2) invest probably another $5,000 – $7,000 to get it fixed up again.  It didn’t take me long and talking with Kim that we decided that we had had enough with the house and we were going to try to sell it and cut our losses and we listed it with a local real estate agent.

Here is the tremendous blessing.  Our realtor was able to find a buyer and the price that we agreed upon is only a slight loss of what I originally paid.  I thought for sure, taking into account my previous experience, that I would only be selling the house at a huge loss.  On Wednesday, Simeon and I traveled down to Marion and I signed the closing paperwork to sell the house.  Everything is being done in cash payments so there will not be any bank or lawyer involved so the amount of fees will be kept to a minimum.

This is  a long story but a good one in sharing how good God is in working all of this out in the end.  I thank so many of you all so much for all of your prayers for this over the years.  I know that many of you have been extremely faithful in praying for it. 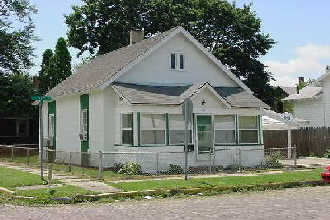