A Reflection on Race 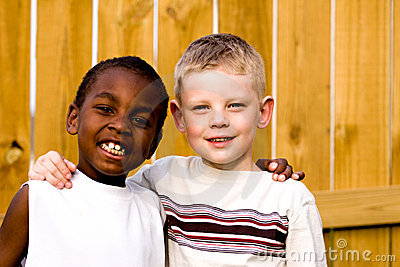 Even before the Trayvon Martin shooting trial had made big headlines and caught national attention, Kim and I were recently reflecting on the difficulties of race relations when we were at a park in Chicago.  As we sat on a bench and discussed with a friend some of the struggles of ministry and watched Simeon play on the playground equipment from a safe distance, we noticed something.  Simeon had quickly struck up a friendship with a little boy of Middle-eastern ethnicity and they played together without fear or even a second thought of apprehension.  They were the same size and age and both had a similar mode of tackling the slides and teeter-tooters with a reckless abandon.  They were instant friends!  After playing for a while and saying good-bye to both the boy and his parents, we both wondered why we all make it so hard!  What do we learn after the early childhood years that says that little boys (or big boys for that matter!) and girls shouldn’t just be together and relate like kids do at such an early age.  Where or when do we learn that we are so different???

If you didn’t see the national attention that the Trayvon Martin trial caused and showed the chasm between races that still exists, then maybe you don’t know what I am talking about.  Well, for one, you can just trust us as missionaries serving on an international, inter-racial setting and folks that have lived in an urban, multicultural setting for many years that we know that racial difficulties still exist.  But if you need more proof, you can check out this video: http://alturl.com/uvgw9

As missionaries, this kind of issue is at the forefront of our minds and consciences.  We are very aware of our race in Ecuador though it is safe to say that we never have really faced any sort of racism or discrimination in Ecuador.  We are privileged-white folks there so we don’t really have any problems in that regard but at the same time, we always know that we are different.  It is always obvious as people often give us double-looks and ask us where we are from.  It is pretty much always positive so it’s not a big deal but the fact that we are of a different race is something that is always on our minds.  Being conscious of our race is something that we are used to in Ecuador which is a reality for many folks here in the states.

In this day and age where we see that the chasm between races is just as wide as it has ever been, our prayer and our hearts are for reconciliation, Christ’s reconciliation.  It’s only through Christ and his reconciling work that we can have hope.  One day, all things will be reconciled in Christ but in this day, it is our work to be reconcilers in this world (Colossians 1:20).  We are Christ’s ambassadors of reconciliation.

“All this is from God, who reconciled us to himself through Christ and gave us the ministry of reconciliation: that God was reconciling the world to himself in Christ, not counting people’s sins against them. And he has committed to us the message of reconciliation.   We are therefore Christ’s ambassadors, as though God were making his appeal through us. We implore you on Christ’s behalf: Be reconciled to God. 21 God made him who had no sin to be sin for us, so that in him we might become the righteousness of God.”  2nd Corinthians 5:18-20