A First Time for Everything…

It’s been quite an interesting weekend. We left Santo Domingo on Friday afternoon and traveled to a little town called Baeza-about a 5-6 hours in total. We stayed overnight in Baeza and met our friends Mandy (our fellow missionary and translator for the class) and Abby and got up very early because I (Kim) was going to be teaching my first class about disabilities in a small village in the jungle. We met our friend Rolando and in his family about an hour outside of Baeza and then started the 2 hourish trip to the village. About and hour or so into the trip-we ran into traffic that was very backed up. It’s the rainy season here so we thought it was probably a landslide which is pretty common. We got down to the bridge and this is what we found! This road has at least 11 bridges alone getting to the village and they are not super sturdy so they don’t allow big trucks. However, they said a large truck passed over it and this is what happened!
The bridge had a HUGE hole in it and we found out it was being held up underneath with very thin tree trunks.
Then we realized they were putting a tree trunk over the hole and then thin planks. Our friend Rolando that was with us said that a few people probably paid the engineers so they could pass over it. That’s when we saw a truck and then a BUS pass over the broken bridge!!!!! It was incredible-don’t worry, we decided not to pass over it-defintely not worth the risk. So, after a lot of travel, we headed the 3 and a half hour trek back to Quito. We will probably be doing the training in a couple of weeks-hopefully the bridge will be fixed! HA! Only in Ecuador… 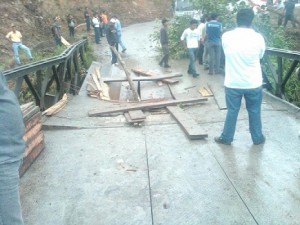 This is how we found the bridge 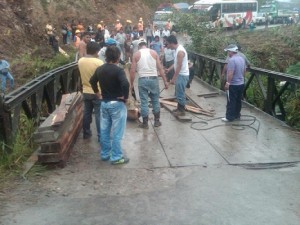 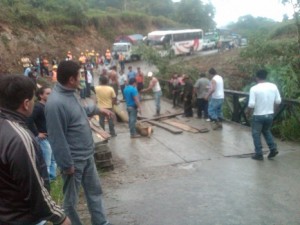 The planks are in place 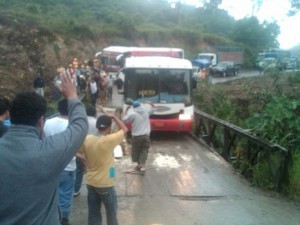 Now the BUS crosses over the planks!

Posted under Travel and tagged with Disabilities, Ecuador, Travel
Comments (0)