We decided that since we didn’t go to visit family in the States and no one was coming here over the Holidays  that we would take a mini family vacation right after the New Year before getting busy with another year of ministry.  This last year was a good but long year for us with many ups and downs and so it was nice to spend some time as a family just enjoying some of the beautiful places in Ecuador (which there are many).  We decided to spend our time in the Banos, Shell & Puyo area of the country.  These three towns/cities are located on the edge of the jungle and have many fun and exciting things to do.  Here’s some pictures so you can get an idea of our vacation. God bless! 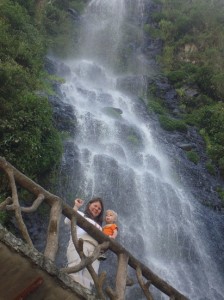 Banos means "baths" in Spanish which shows how it is named after the hot springs that are located throughout the area. It is also known for the many waterfalls which can be found in the area. This is the closest waterfall to where we were staying. We could walk to it and could see it every morning when we went up to the roof of our hostal for breakfast. 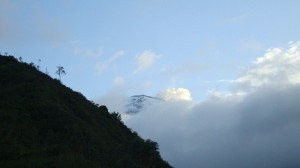 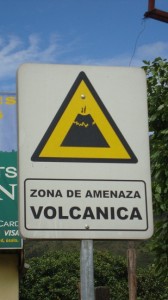 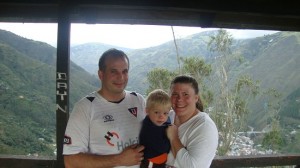 We did a lot of hiking in Banos. We're still sore!!! Here's the picture from a Banos overlook we climbed to. Very beautiful!

We also visited Shell which was the original mission outpost for missionaries as the would travel into the jungle. You may know the stories of Jim Elliot and Nate Saint who were two of the five missionaries martyred by Natives back in the 50's. This is the original house that Nate Saint built which is now a museum dedicated to their memory. 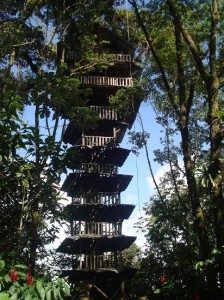 Also in the Shell area was this jungle tree house where you could climb to the top and overlook all the other trees in the jungle. It was amazing!! 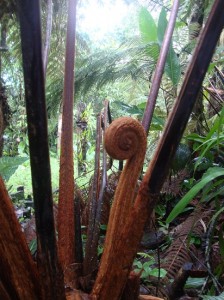 We also visited Puyo which is an outpost for trips into the jungle. While there, we took a jungle tour where we got the opportunity to see all kinds of different plants and insects and learn about how the indigenous live in the jungle. This was one plant called the "Monkey Tail." Can you guess why it was called that? 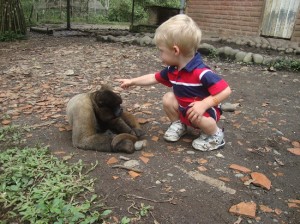 One of our coolest experiences of our entire time was visiting a monkey refuge where the monkeys were free to come right up to you and play with you. Here’s Simeon petting the Alpha monkey.