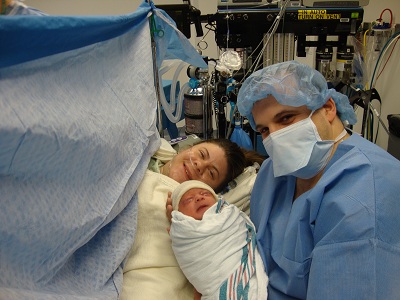 We need to share of God’s goodness to us through the birth of our son Simeon. It is a pretty neat story!

Before beginning the story, we should explain that through Kim’s experience and knowledge in the healthcare industry and with what we had learned in our birthing (read “modern day Lamaze”) class, we had decided we would like to have as natural of a birth as possible. We had a Nurse Midwife instead of a doctor and were planning on doing as much as possible at home during labor before heading to the hospital. Unfortunately, things did not go according to plan.
To begin with, Kim had some early signs of preeclampsia (high blood pressure, swelling, and additional protein in the urine) heading into the delivery date. This caused a little bit of anxiety for us and our midwife heading into it.
Early on Simeon’s due date, March 4th, at 3 a.m., Kim’s water broke, but since she was not having major contractions, we decided to wait until 7:00 a.m. to paige our midwife. When we were able to get a hold of her, she told us to come on in to the hospital and get setup. Even though Kim’s contractions were not advanced, with the preclampsia symptoms, she didn’t want to take any chances.
So we headed in and by 9:30 a.m., Kim was all hooked up to the equipment and had a pitocin drip started to have the labor induced. The pitocin definitely worked as hard contractions quickly started and lasted for about 8 hours. At around 5:30 p.m., after going through a little over 8 hours of grueling contractions which resulted in a lot of sickness, we were seeing very little progress. Kim was only dilated 1 cm. We could see that this was going to be a long haul and decided that Kim could not do this forever, so we opted for the epidural.
The epidural was met with a lot of relief. Much comfort and rest resulted. In addition, the pitocin drip amount was increased and so the contractions were strengthened with no pain to mama. Kim was able to sleep pretty well while she labored. Unfortunately, not much progress was made with the delivery. By 7:00 a.m. on March 5th, Kim was only dilated 3 cms and Simeon’s head had hardly descended. Our midwife consulted with the doctor on call and they both felt the birth was not going to occur vaginally. Being folks with good common sense, we followed their advice and decided to go with a C-Section.
Simeon Carter Delp was born at 8:34 a.m. on March 5th via C-Section weighing 6 lbs 9 ozs and having a 19.25 inch length. Our first family picture is at the top.
Here is the kicker: during the C-Section, the doctor noted that umbilical cord was extremely short, as well as it was wrapped around Simeon’s neck. In the end, the birth could not have occurred vaginally as every time he would try to descend, the cord would wrap around his neck and not allow the descent.
We are thankful to our risen Lord Jesus Christ and his provision of a healthy and well cared for birth our son and a healthy operation for mama. Both mom and son are doing well and recovering from the ordeal. Simeon has started nursing from mom.
We decided on the name Simeon because of the biblical reference in the Old Testament to the 2nd Tribe of Israel and in Luke 2 to the priest who was aware that Jesus Christ was the messiah. In Hebrew, Simeon means “obedient” and “listening”. We really like this name!!!
You can see more pictures of Simeon on our Facebook pages. Thanks for reading!

Posted under Simeon and tagged with Simeon
Comments (9)