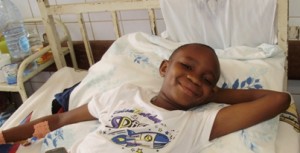 It was an honor to be invited.  The twenty or so young people from Central African Republic had been invited to help Cameroon celebrate National Day the weekend of May 20.  On May 15 they were on a bus nearing the Cameroon border when the unexpected happened.

Four armed men came out from the side of the road and ambushed the bus.  Shots were fired, valuables were stolen, and the victims were treated harshly.  Thankfully there was no loss of life.  One of the chaperones was a nurse, Florentine, who was able to assist the wounded students. 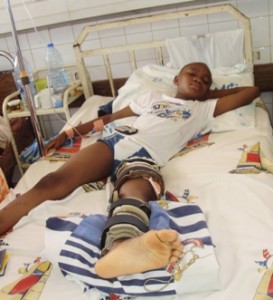 One of the students who was wounded is the niece of a friend of ours.  Instead of performing with the dance troup this afternoon, she and Henri, another young child, lie in hospital beds waiting for surgery.  Francine has a broken ankle, Henri a broken leg and both have bullets in their legs.  A young man, Claudet, was also wounded and waits surgery to repair his broken leg.  He too took a bullet to the leg.  Florentine was given 2 stitches in her lower lip where she’d been hit.

I spent a couple hours at the Yaounde Central Hospital this afternoon in the emergency surgical ward checking up on Francine for her Uncle Mark and Aunt Germaine with whom she has lived for several years.  Henri and Francine are in good spirits considering the trauma they’ve experienced, as well as the disappointment at being in the Yaounde Hospital instead of the National Day Parade tomorrow.  They’re to be transferred to the Pediatric Surgical ward tomorrow.

Please pray for the 3 who are waiting for surgery:  Francine, Henri and Claudet
Pray for Florentine who is taking care of the 3 (feeding, cleaning etc.).
Pray that the party taking responsibility will pay the medical expenses so the operations can be done.
Pray for the families in CAR who are not able to be with their hospitalized children.