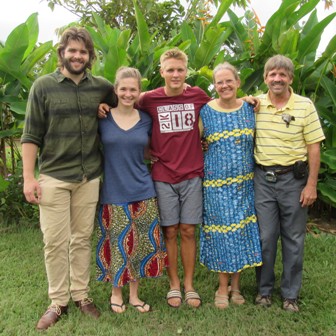 We are Ron and Janet Ziegelbaur, missionaries with the Evangelical Covenant Church.  Ron works in maintenance and technical services; Janet has done a variety of ministries including Christian literature, home schooling our 3 children (the oldest of whom is in college), and assisting with mission bookkeeping.

Ron first went to Africa as a short term missionary with the Covenant in Congo (then Zaire) from 1986 to 1988.  He returned to Congo in 1991, a commissioned full time Covenant missionary.

Janet served initially under Wycliffe Bible Translators in Congo (Brazzaville) as  one of three women working in the Munukutuba language from 1987 to 1988.  From 1988 to 1991 she served as a short term missionary with the Covenant in Congo (then Zaire).  She returned to Congo in 1993, a commissioned full time Covenant missionary and advisor to the Congo Covenant Church (CEUM) department of literature.

Since July 2010 we’ve been serving in Yaounde, Cameroon where Ron is the Director of Technical Services at Rain Forest International School (RFIS) and teaches Industrial Arts classes.  He oversaw the construction of a prayer chapel, a new student hostel and staff housing unit.  His most recent construction project is a covered gym at RFIS.  Janet serves the administrative role of Country Coordinator for Covenant missionaries in Cameroon and helps with Covenant mission accounting.  At RFIS she serves as Guidance Counselor.  Once a week she disciples a group of high school girls at RFIS.