One week ago today Francine and her friends were all able to have the surgeries to repair their broken bones.  I went to the hospital on Wednesday May 23 to visit Francine and Henri.  I was told they had been transferred to the pediatric surgery ward (Chirurgie Infantile).

In the lower bunk to the right Henri lay with a cast on his leg.  And to the left on a 3rd bunk bed Francine was sleeping.  She’d had a rough night, unable to get comfortable.  After a few minutes she woke up and we chatted for a bit.  I also got to know Joanna, her chaperone.

Wow, that’s a long cast for a broken ankle!  They said the bullet had passed through her leg, so they had just cleaned the wound.  While I was there, the doctor came to see the children, and perscribed pills for pain so she won’t have to wait uncomfortably for a busy nurse to give her an injection next time she’s in discomfort.

Joanna had also been on the bus between Bangui and Cameroon when the bandits had attacked.  With tears streaming down her cheeks she recounted her story.  After making everyone on the bus disrobe, after going through everyone’s pockets and luggage, the bad guys were convinced that these small children were concealing more money somewhere.  Poking Joanna with their guns, they insisted that she was not a chaperone for the children, but that she was going to Douala to purchase items for resale in Bangui.  Thanks be to God, they finally left her alone.

She also  told me how the other children on the bus had been unable to sleep during their stay in Yaounde.  They had marched in the May 20 Parade, celebrating Cameroon’s independence.  But a cloud hung over what should have been a very exciting trip.  Tuesday morning, with anxiety still in their hearts, they boarded another bus for the return trip to Bangui.  Florentine, her lip healing, accompanied the children.  Joanna took Florentine’s place in the hospital caring for Francine.  On Monday evening Francine, Henri and the young man Claudin were operated on to repair their broken bones.

I shared with them Scripture that helped me after our armed robbery back in CAR in 2003.  Philippines 4:6-8 says,

6 Do not be anxious about anything, but in everything, by prayer and petition, with thanksgiving, present your requests to God. 7 And the peace of God, which transcends all understanding,will guard your hearts and your minds in Christ Jesus.
8 Finally, brothers, whatever is true, whatever is noble, whatever is right, whatever is pure, whatever is lovely, whatever is admirable—if anything is excellent or praiseworthy—think about such things.

I found that when faced with an event such as they lived through, your heart races with anxiety, and your mind turns over and over what happened.  These verses remind us that the remedy to such anxiety is prayer, petition and thanksgiving.  It also helps to concentrate on that which is true, noble, right, pure, lovely, admirable and praiseworthy rather than on the bad guys.  And then I prayed with them – for healing, peace, comfort, and for the bad guys as Jesus instructed (Matthew 5:43-44)  43 “You have heard that it was said, ‘Love your neighbor and hate your enemy.’  44 But I tell you: Love your enemies and pray for those who persecute you…”

By the time I left, Francine was smiling — still pretty bored with nothing to do but stare at the walls, out the window and take naps, but she was smiling. 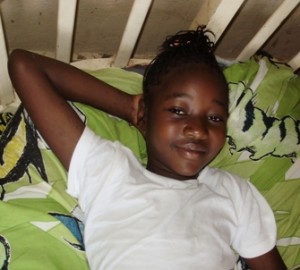 On Friday the hospitalized students were flown back to Bangui on a commercial flight.  They and their families are glad to be reunited.  Please continue to pray for emotional and physical healing.