Confessions of a Foreigner in Japan 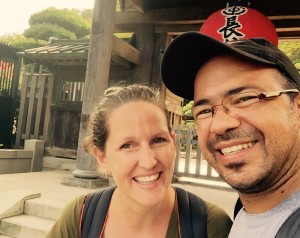 1. I don’t always use an umbrella.  This is basically a cardinal sin here.  If you want to see people really nervous, walk around in the rain without an umbrella.  Even if it’s not raining very hard, very kind people will share their umbrella with you at stop lights and other locations.  I really don’t mind getting a little wet, but I think the fear of catching a cold in the rain is as strong here as in many other places, or perhaps stronger.

2. Once in a while, if I’m in a huge hurry and I have on shoes that tie instead of flip flops that I can just slide off, I “might” run in the house with shoes on to grab that one last thing.  For anyone who knows me well, unfortunately, I’m one who has a ton of “one last things” and it always takes me what seems like 10 minutes longer than the average person to leave the house.  I try to limit this “cheating” to only my house so as not to offend too many people.

3. I sometimes eat in public and I allow Sophia to eat in public whenever she wants to.  This has changed a bit since 15 years ago when I really NEVER saw anyone eat in public.  Now, I’ll see the occasional high school student scarfing down a piece of bread with anko in it (red bean paste) or a salary man (business man) eating a fast onigiri (rice ball with something salty in it like fish or a Japanese pickle) before he gets on the train. But no matter what, one must eat quickly and discreetly, usually covering one’s mouth with the free hand.  Sophia and I enjoy a snack once in awhile, or I let her eat a meal before we get on the train (and sometimes even IN the train!). People seem to be rather forgiving since they assume we have a different culture when it comes to eating in public.

4. I use napkins.  This is one phenomenon that I still can’t understand even after living here for two years and now about 10 more weeks added to that.  How do people in Japan eat without napkins??!! We’re talking ANYTHING and EVERYTHING…  McDonald’s cheeseburgers, rice balls, hot, splashy ramen noodles, sandwiches with mayonnaise and mustard…  and rarely a napkin is needed.  I don’t know how my host culture does this.  I don’t know how they keep their mouths clean, but I do know they tend to eat much more carefully than I do.

5. I sometimes put newspapers in burnable garbage. I suppose this isn’t the end of the world because it is technically burnable, but there is a separate day and a separate way for throwing out newspapers and since I don’t have a subscription to one, and probably only get our small neighborhood newspaper once every couple weeks, I pull the lazy move and throw it in with the burnables.

Am I proud that I break these cultural rules?  No, not at all!  But I don’t have time to list all the rules I am keeping…  from talking quietly outside our house to laying chopsticks properly down on a plate when not using them, waiting on the right or left side of an opening train door, carrying dirty diapers and all my garbage with me to throw out at home (unless I come across the rather rare public garbage can), delivering gifts to our next-door neighbors. I’m trying to find balance between respecting the culture and also respecting my own culture that I grew up in and is a large part of who I am.  One advantage of looking a bit different here is that people appreciate when we try to stick to the cultural norms, but they are also very forgiving when we don’t.  These things may seem small, but we realize that every time we choose to conform a bit in areas of importance, we are showing love and respect to our host culture and communicating that we know there are ways to do things here, there are usually good reasons for these ways, and we will fit in better and cause less waves if we follow the flow.

Now if we could just remember to bring our own soap and hand towels to the bathrooms!

This entry was posted in Diary, Sophia, Trips. Bookmark the permalink.