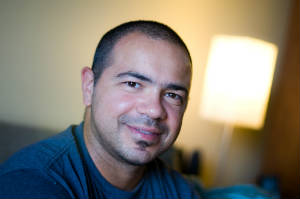 Born in Sao Paulo, Brazil, Fabio grew up in a Catholic family but at age 9, his family went to the Presbyterian Church where he spent the next 10 years. At age 10, Fabio opened the Bible for the first time and “preached” to his parents, sister and grandparents in a devotional that they usually had at home. As a teenager, he learned guitar and helped with worship at church.  Later he was ordained pastor by an Interdenominational Church. Fabio loves to study history and theology and he holds a Bachelor’s degree in Business and a Master’s degree in Marketing. He served churches of different denominations and participated in homeless, street ministry, community development and preaching.

At age 25 he had his first multicultural experience, giving him the opportunity to learn a new language.  Once a week he took care of a group of Bolivians who got together to study the Bible in Spanish. At that time, he had the chance to disciple them, speak on the radio, baptize some and even had the privilege to choose the names of their children (when the parents gave him this honor).

In 2000 he went to Canada to take some English courses and that experience opened doors and led him to move to Canada in 2004 to help a Brazilian missionary and pastor in Toronto. During the next two years, 2004-5, he had the chance to work with several churches – Jamaican, Canadian and Brazilian – playing guitar, preaching and teaching. At the end of 2005, Fabio came to the United States for the first time and had the chance to preach a few times in Spanish and Portuguese. Fabio has been serving as a businessman/tentmaker since he was 21 years old.  Most recently, he had the chance to work with Rob Reed (of Covenant World Mission) for a couple of years in a church-planting project. After that, he spent two more years in a home group project with a Vineyard church in Barcelona where people from different places, cultures, and denominations got together in Fabio’s apartment. These experiences helped Fabio to have an overview about different cultures, learn languages and learn how to work in a foreign environment, especially how to combine ministry and work, life and mission.