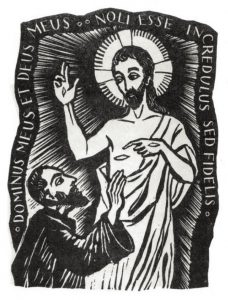 What is the force that causes this ball to drop to the ground? (Drops ball) Gravity! What causes an airplane to stay in the air? The rules of aerodynamics. What causes a roller coaster to stay on the tracks when it goes upside down? Centrifugal force. All of these terms are terms from science and I’m bringing them up because our topic today begins with the question… Are science and religion compatible? Is it possible to have a scientific mind and believe in God? Over the years, people have begun to think that science and religion are completely incompatible. They say that science is about facts and religion is about faith. But just a few hundred years ago, almost all Western scientists were also Christians. And in 1997, when a survey was conducted by a science magazine, about 40% of the scientists said they believed in God… and not just as a Creator, but as someone they can pray to and receive an answer. In 1917, the same survey was given and about the same amount, 40% of the scientists said they believed in God.

In the last 10-15 years, we can find more and more studies that show science and religion are more compatible than we may have first realized. In a 2004 article from National Geographic, Joel Primack, astrophysicist and co-developer of a theory that seeks to explain the formation of the universe, said,

“In the last few years astronomy has come together so that we’re now able to tell a coherent story” of how the universe began, Primack said. “This story does not contradict God, but instead enlarges [the idea of] God.”

Today, many scientists say there is no conflict between their faith and their work. Scientists may be just as likely to believe in God as other people, according to the surveys. And we know that some of history’s greatest scientific minds, including Albert Einstein, were convinced there is intelligent life behind the universe.

Brian Greene, a world renowned physicist, believes we are taking giant strides toward understanding the deepest laws of the universe. That, he says, has strengthened his belief in the underlying harmony and order of the cosmos. “The universe is incredibly wondrous, incredibly beautiful, and it fills me with a sense that there is some underlying explanation that we have yet to fully understand,” he said. “If someone wants to place the word God on those collections of words, it’s OK with me.”

So, what does science have to do with the text for today? Well, Thomas is famous for doubting that Jesus had been resurrected. In what may be perceived as a scientific way of doubting (he wanted proof), he said he wanted to see the nail marks in his hands and put his finger where the nails were, touching Jesus’ side. He already had proof that Jesus was dead, now in his disappointment and fear, he wasn’t going to believe he was alive without seeing for himself. Let’s look at the text again, line by line.

The doors were locked for fear of the Jewish leaders. Some think the disciples were afraid they’d be accused of stealing Jesus’ body. They knew his body was gone, but didn’t yet know he was resurrected. (What does fear do? fear makes us lock our doors, fear tries to shut Jesus out, fear makes us go inward, never outward). Thomas is famous for being the doubting one, but actually, all of the disciples reacted much like Thomas at first. Mary Magdalene had seen Jesus at the tomb and had told the disciples he was alive. but they didn’t believe her.

So, the doors were locked, but Jesus came in anyway! He stood among them and said…

“Peace be with you!” (first time) They were afraid and Jesus says “Peace”.

vs 20 – he showed them his hands and side. They were overjoyed.

vs 22 – he breathed on them, “Receive the Holy Spirit.

vs 23 – If you forgive anyone’s sins, they are forgiven; if you do not forgive them, they are not forgiven. This is a strong statement… if the disciples forgive people’s sins, they are forgiven? And if they don’t, the sins aren’t forgiven? Isn’t that too much power to give a bunch of sinful humans? The disciples are just normal people. Well, some commentators say that in John, sin is considered a rejection of Jesus. While Jesus was with them, it was obvious who believed and who didn’t, but as Jesus breathes the Holy Spirit on them, it can be seen as a commissioning, a sending…  to live out forgiveness as the true Church, representing the love and forgiveness of Christ.

vs 25 – the other disciples told Thomas, “We have seen the Lord!”…  His response: “Unless I see the nail marks in his hands and put my finger where the nails were, and put my hand into his side, I will NOT believe.” He draws a line here…  unless…  unless you heal me of cancer, unless my daughter believes in you, unless my son gets out of his addiction, unless the person I love comes back to me, unless, unless, unless… I will NOT believe. It’s like he’s threatening God. “Do this or I will not believe in you.” Have you ever made a “promise” like this with God? Unless this happens, or unless you don’t allow this to happen, God, I will not believe in you.” (Another related word is, “Since”. Since my husband left me, since my wife cheated on me, since my child died, since I lost my job, since I didn’t win that reward… since, since, since…  I will NOT believe in you.”) We bargain with the Creator of the universe out of our pain and disillusionment, and in Thomas’ case, possibly his sheer disappointment with seeing his friend, Jesus, on the cross after really believing he was the Savior of the world, King of all Kings… but now he is losing all hope and dreams for the future. He won’t even believe his friends who said, “We have seen the Lord!” He doesn’t want to get his hopes up and then be disappointed again, so he won’t listen to them. What if they are wrong? What if they just saw a look alike? No, I must see him myself, I must touch him and hear his voice and smell his smell.

vs 26 A week later, Thomas was with them. The doors were locked once again and once again Jesus came and stood among them. He said, “Peace be with you!” (third time). I love that Jesus says peace BEFORE he proves that it is him and he is really alive. We can have peace before our doubts are resolved. We can receive peace from Christ in the midst of our confusion and pain. And the fact that this phrase is three times in this short passage

vs 27 Then, reading Thomas’ mind, he says right to him, “Put your finger here; see my hands. Reach out your hand and put it into my side. Stop doubting and believe.”

vs 28 Thomas responds, “My Lord and my God!” What surprise, what joy, what shock, and what a phrase of recognition and submission using the singular possessive… my Lord and my God. We hear the closeness and intimacy.

vs 31 But these are written that you may believe that Jesus is the Messiah, the Son of God, and that by believing you may have life in his name.

And this is why it all happened. So, we can know deep down that Jesus is the One who shows us the way to life, the path to love. He is the Messiah which means the Anointed One or Chosen One. It comes from Hebrew and means the same as Christ, which comes from Greek. We read about the doubt of Jesus’ disciples, including Thomas, so that by believing we may HAVE LIFE.

Thomas said, “Prove it!” and Jesus did. Thomas doubted, but as we see here, all of the disciples doubted at first. And doubt isn’t the opposite of faith. Paul Tillich, German American existential philosopher and theologian says, “Doubt is not the opposite of faith; it’s one element of faith.” In the Old Testament, we see the Jewish people doubting all the time. Does this mean they don’t believe? No! It is part of their faith, it is part of their belief, sometimes it is even an embodiment of their faith. For example, if I don’t believe in God, I will never try talking to God. But if I just doubt his existence, I might say, “God, are you there?” and just by speaking to him, I am acknowledging that part of me believes he might exist. I tell friends who are going through periods of doubt, “It’s okay. Keep talking to God about your doubts. Just by continuing to pray, you’re acknowledging His presence and that is an act of faith.”

Some say the opposite of faith is fear because in fear, it is difficult to believe that the promises of Scripture are true. Others say it is certainty. Anne Lamott, an author, says, “The opposite of faith is not doubt, but certainty. Certainty is missing the point entirely. Faith includes noticing the mess, the emptiness and discomfort, and letting it be there until some light returns.”

Are you a questioner or doubter? Are you a curious person who is always wondering “why” and “how”?  Good! You’re like the disciples who were the first Church! You’re like Thomas who later went to India and told people hearing for the first time about Jesus. Keep asking the questions. Keep seeking and searching. It might be that the wonder of science and creation will enlarge your faith. It might be that in the deep, difficult questions, you’ll hear the voice of God or sense his presence or feel the love of your Creator. And my guess is, if you choose doubt instead of apathy or indifference, you will eventually receive peace and you’ll be able to embrace what Jesus says to Thomas, “Stop doubting and believe!” And through believing, you will have life and wholeness! Amen.

This entry was posted in Diary, Let's talk. Bookmark the permalink.