Finally after 5 months (145 days, but who’s counting) my 5 week quick trip is over and I’m back in Cameroon. I was happy to have had so long with Michelle, Nate and Baby Milo!

In the days of Covid-19 nothing is normal, everything is delayed – especially international travel. We learned that Cameroon citizens and expats with residency were being allowed entrance to the otherwise closed border. So, long story short, I finally had a ticket to return. Boarding the plane required a negative covid test, which I was able to get, thankfully. Timing was crucial, as the test had to be done within 3 days of arrival in Yaounde. With some tests taking over 3 weeks, I was on pins and needles until I got the test results back thanks to God’s great networking.

Not wanting to risk a cancelled flight from Grand Rapids to Detroit (that happened last year), I had Michelle & Nate drive me to Lansing where my niece, who lives in the Detroit area, met me and took me to the Detroit metro airport. Fun to have a last couple hours with her!

Check in was a surprisingly easy process. I met up with fellow Covenant missionaries Jeff & Carolyn Stoker, who had also been stuck in the US (having come back for their daughter’s wedding). Flights to Paris and on to Yaounde were uneventful – though keeping a mask on for 6 and 7 hours at a stretch is a challenge. It made me slowly savor all snacks and meals!

Arrival in Yaounde was interesting as we were met by someone in a hazmat suit who sprayed down everyone’s carry on luggage with what smelled like bleach water. Formalities took longer than usual as everyone had to present their covid tests. We ended up being the last ones out the door anyhow since we each had 1 piece of luggage missing — they came the next day or 2.

Finding Ron in the parking lot was the reward for a very long and complicated journey. 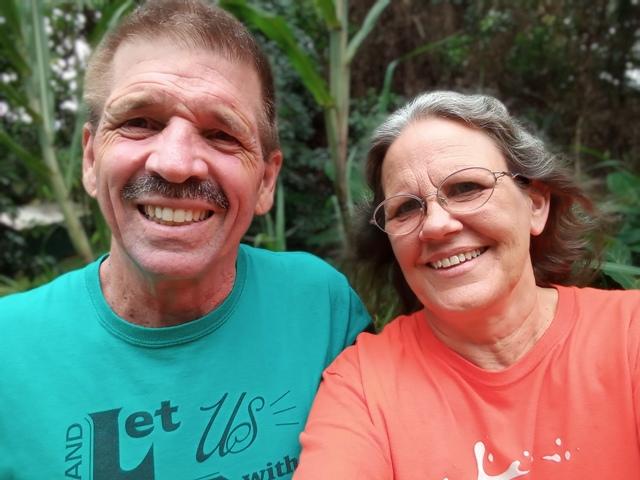