Book Highlights from The Genesee Diary: Report from a Trappist Monastery by Henri Nouwen 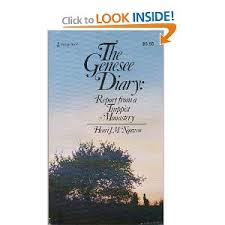 One of the books I snatched from my mom’s bookshelf before leaving for Japan, The Genesee Diary was a read I was looking forward to mainly because I tend to love most everything that Nouwen has penned.  And this is no exception. Nouwen somehow gets the idea to spend 8 months with Trappist monks in New York. He realizes the irony and impossibility of becoming a “temporary monk”, but those who could approve such a thing did, and we get to reap the beautiful harvest of his time spent there.

I could practically quote the whole book, and the quotes don’t really need commentary, so I’ll just splatter a few below…

Reminding me of the rich traditions and wisdom of Twelve Step Programs:

“Nepsis means mental sobriety, spiritual attention directed to God, watchfulness in keeping the bad thoughts away, and creating free space for prayer. While working with the rocks I repeated a few times the famous words of the old desert fathers: “fugue, race et quiesce” (live in solitude, silence, and inner peace), but only God knows how far I am, not only from this reality but even from this desire.”

I relate too well to these extremes:

He lists five suggestions about anger, but the first is my favorite:

“First: Allow your angry feelings to come to your awareness and have a careful look at them.  Don’t deny them or suppress them, but let them teach you.”

The constant search for attention and success and what happens when one realizes its futility (felt acutely by many who live far from “home”):

“When nobody writes anymore; when hardly anyone even thinks of you or wonders how you are doing; when you are just one of the brothers doing the same things as they are doing, not better or worse; when you have been forgotten by people – maybe then your heart and mind have become empty enough to give God a real chance to let his presence be known to you.”

Wise words from his father, recently retired, who writes to him in a letter:

“As a man on pension, you see the world recede. No one needs you any more, so you have to stand on your own feet. Thus the Abbey will be a good preparation for that time which only seemingly is so far away from you.”

I’m not even halfway, but this is a book that is soothing to my soul.  It’s making me stop and think about what’s really important in life.  Through Nouwen’s brutal honesty about his interior motives and the constant banter going on in his mind as he works and as he prays, I’m prompted to look at my own thoughts and motives with a bit more attention.  The process surprisingly brings me peace as I’m able to let go of the fears and anxieties I otherwise wouldn’t know were there and seek, along with Nouwen, a simpler, more “monastic” way of life.

This entry was posted in Books & Movies, Diary, Let's talk. Bookmark the permalink.