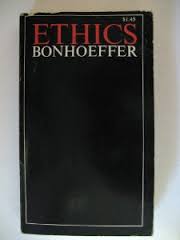 I also recommend the movie “Agent of Grace” – good material to understand his life and position regarding The Nazis. Dietrich Bonhoeffer was a Lutheran pastor and theologian. He became known due to his resistance to the Nazi regime. He was also involved in a plan to assassinate Hitler. He was executed in April 1945 at a Nazi concentration camp just 23 days before the German surrender.

This entry was posted in Books & Movies and tagged Books. Bookmark the permalink.