Good pasta. Good gnocchi. Good wine. Family getting together around the table every Sunday…

My passion for Italy grew more and more when my grandparents shared about their families, stories and life in Italy.

My favorite soccer team was founded by Italian immigrants in 1914 as Palestra Italia. Today it is known as Palmeiras. Actually, I was around Italians and families all the time as I grew up in Sao Paulo. First, my little street was absolutely full of Italian families. And second, the most important museum about immigrants was just across the street.

I loved to go there and see the documents, movies, letters, suitcases, and other exposed objects that had to do with the immigrants who came from Italy to Brazil. I remember when I found the file, documents and the arrival date of my family to Sao Paulo from Naples.

I do not need to say that one of the reasons my parents decided to name me Fabio was because of my Italian background.

After this short introduction you are not going to be surprised if I say that my favorite cuisine is Italian and my favorite language is Italian, too.

In 1997 I flew to Israel, but on the way, I stopped by Rome in Italy for the first time. I could never have imagined I would come back to Italy after 10 years in 2007 to study Italian in Florence and explore the magic “Italian land”… 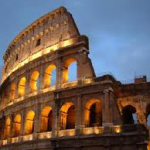 By the time I went back to Italy I had studied the language in Sao Paulo and Barcelona. I planned to fly to Italy and spend a few weeks there during the summer. I decided to share an apartment with other foreign students in the old city of Florence and take an intense Italian course. Explore the country, practice Italian, take pictures, meet new people and enjoy the cuisine and weather was part of my Italian plan…

So my itinerary and journey started in Milan by exploring the city of fashion style and fine clothes, important galleries and the well-known Opera House, La Scala. The Duomo, also in Milan, has a baroque and neo-gothic façade and is the 3rd largest church in Christendom.

Saint Augustine was baptized in the Milan Cathedral. I remember I spent a few hours exploring the Cathedral, observing the interior and its gothic details. 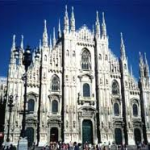 Although Milan is a business city and important industrial pole of Italy, the park and castle Sforzesco, provide a green background with their natural foliage. The Rondanini Pietà, a marble sculpture by Michelangelo, is housed in the Museum of Ancient Art in the same area.

The Opera House, La Scala, and the Galleria Vittorio Emanuele II, the oldest mall in Italy, bring a charming and classic touch to the city. A week after my first visit in Milan, I would be back to Milan just to see the famous painting, The Last Supper by Leornardo da Vinci, at Santa Maria della Grazie church.

La Cattedrale de Santa Maria del Fiore is a huge Gothic duomo (dome). Florence’s most famous square is Piazza della Signoria. It holds some important statues including a copy of Michelangelo’s David. The medieval Palazzo Vecchio is also part of the Piazza. The Baptistery of John the Baptist, from the 11th century, is one of Florence’s oldest buildings and The Ponte Vecchio (old bridge), built in 1345, composes another chapter in this magic Italian world.

I spent many afternoons walking in Florence after my classes and I enjoyed the art and the beauty of the city by observing each façade, each corner, each door, each detail…

La Galleria degli Uffizi holds the world’s most important collection of Renaissance. It is one of the 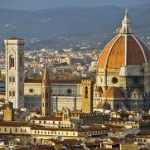 La Basilica di Santa Croce (church of the Holy Cross) is the principal Franciscan church in Florence. It is situated on the Piazza di Santa Croce. It is the burial place of some of the most illustrious Italians, such as Michelangelo and Galileo. Il Museo dell’Opera del Duomo (Museum of the Works of the Cathedral) is a very small museum, but two of my favorites works are there: Magdalene Penitent by Donatello and Pietà by Michelangelo.

Well, my memories of Italy go on and I want to take you with me in a train from Florence, after one of my classes, and go to Pisa in order to visit the most famous sites of the city such as the Leaning Tower, The Duomo, Camposanto and the Battistero.

Let’s keep traveling by train…
You probably do not hear about Padua very often, but I love it there. I stayed in Padova (or Padua) for a couple of days and I enjoyed walking in the small town, seeing the green scenario around the city and enjoying the culture and rich history.

La Basilica di S. Antonio, Piazza dei Signori and University of Padua are sites that carry important memories of the past. The Astronomical Observatory of Padua and Galileo’s home, where he lived during the 18 years he taught in the city as professor of mathematics at the University of Padua, show us how Galileo has an important role in the history of the city.

Venice is the type of city where you can walk around, stop by a bridge and take a picture, have a good talk and enjoy the Venetian atmosphere.

My last stop of this journey is the Vatican and Rome.

In 1997 I went to the Vatican for the first time but it was in my second stay in Italy where I was able to explore the Roman Empire.
I loved walking everywhere . The center of Rome is the Colosseum. As soon as I left the Colosseum, I walked through The Roman Forum that is a huge rectangular place surrounded by ruins. Near the Colosseum I found a very small church, San Pietro church, where one of the most important sculptures by Michelangelo is displayed, Moses. Michelangelo also designed the famous Campidoglio (the plaza).

The Pantheon contains the tombs of eminent Italians including the artist Raphael and Italy’s first king, Vittorio Emanuele II.

There are several plazas in Rome but the most important one is probably the Piazza di Trevi where we can find the Trevi Fountain – one of the most famous fountains of the world.

If you want to follow the church martyrs’ footprints in Rome, you should go to The Mamertine Prison where Peter and Paul were emprisoned. It is also a great experience to visit the Christian Catacombs. It took me almost the whole day to visit the Catacombs and almost another whole day to explore the Vatican and the Sistine Chapel, but it was worth it!

In the Vatican we can find another Pietà that is a Renaissance sculpture by Michelangelo. The Sistine has the amazing chapel ceiling painted by Michelangelo called The Last Judgment.

I finished my stay in Rome by visiting St Paul at the Three Fountains. At that place, there is a church marking the presumed site of Paul’s martyrdom.

There is also more to explore in Italy, so I will let you finish this journey with your own hands and map…