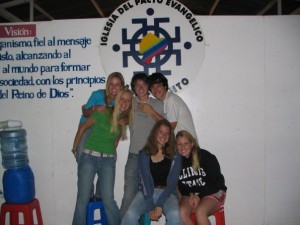 In September of 2004 Kristina and I both boarded a plane to Quito to spend our first year of college at Covenant Bible College(CBC), a one year
discipleship program. We had met 2 years earlier in Japan and had kept in touch but we had both decided separately to attend CBC. It was a very formational year for us. It was the point in which I (Erik) chose Christianity for myself as opposed to it being what I inherited. We developed many good friendships with the other students and teachers that we still maintain today. We also made friends with a family from the community, especially the oldest son Fabian who owned an internet cafe near the school. We were able to spend many holidays and experience the Ecuadorian culture with them. During the year Fabian had a son and named him Erik Paulino Iza. At the end of the year he and I took a bus trip to Machu Picchu as reporters for the newspaper he had started.

On February 5th 2005 I attended a local bullfight with some other students. For $1 you could get a seat in the stands and for $2 you could jump in the ring. As a foolish teenager I believed I was probably invincible and decided to jump in the ring. To make a long story short, I was flipped in the air twice, stomped on and gored by the bull in my leg. It was a miracle nothing worse happened to me (can be seen on youtube- not for the faint of heart: http://youtu.be/P7LiUwH7v_o). It was such a close call that the bull took off my necklace and left a scratch right across my carotid artery. I was taken to a clinic and then onto Voz Andes hospital where I was stitched up and the wound was cleaned. I spent the next week in bed recovering and had to walk with a cane for several weeks after. I still suffer back problems from the incident but I thank God that it wasn’t worse; the very next person to go up against the bull that day ended up paralyzed. While I was laid up in bed for the following few days, one of my professors, Baxter Swenson, came to visit me. He told me that God had spared my life because he had a plan for me. He told me that he thought I would be great as a missionary, and this has stayed with me ever since. 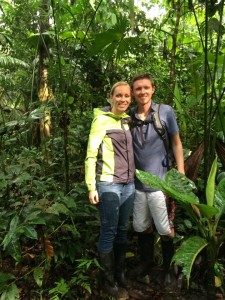 After CBC I went back to Ecuador several times. The first time was to fulfill my role as godfather for the baptism of Erik Paulino. Two years later I went back to travel around South America with on of my roommates from CBC and to attend a wedding. Two years later I spent 6 weeks in language study in Quito before doing a study abroad semester in Argentina. After we were married, Kristina and I did some translation work in Central America with Covenant Merge Ministries and between trips we spent a month in Ecuador, reconnecting with friends.

While we had visited Ecuador many times it was never with the intention of moving there. Last fall when we were first considering Covenant World Mission, Ecuador suddenly started popping up everywhere in what we have referred to as “divine coincidences”. We decided to take a trip to Colombia and Ecuador to meet with the church leaders, visit the various projects that they have, and see if Ecuador would be a good fit for us. We were able to visit many different projects that the Ecuadorian church had going through their development foundation called FACE (Foundation for the Advancement of the Community in Ecuador). They even had a project equipping a community in the jungle to grow oyster mushrooms, which coincidentally has been something I have been researching and experimenting with over the past year at home. We had good conversations with the missionaries while we were there, many of whom are already good friends. Our friend Fabian has also been working in his own community trying to do development work through political means and on his own. We were even able to meet the president of Ecuador with him. It was an overwhelmingly positive experience and we decided to move forward with our desire to do work with FACE in Ecuador. 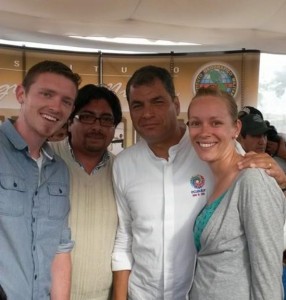 With our friend Fabian, and the current president of Ecuador, Rafael Corre