Since all four of our parents are involved in Covenant World Mission and Kristina grew up as a missionary kid in Japan,Our  you might assume that Covenant World Mission was the next obvious step for us. The truth is that it has been a long and intentional journey for us. Growing up we had both developed a love for other cultures and a desire to be involved in positive change in the world. This led us to spend our first year of college at Covenant Bible college in Ecuador and then to go on and be Global Studies/Spanish majors at North Park University. After we got married we still wanted to live overseas in some context, and share the hope of God’s Kingdom in an international setting, but weren’t sure as to how, where or doing what. 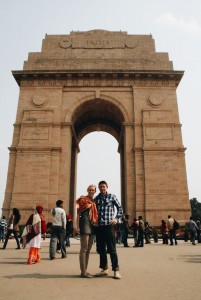 Over the next several years we traveled all over the world visiting dozens of missionaries and development projects trying to discern what our role in God’s greater Mission could be. In the spring of 2012 we were able to spend 6 weeks with the Hindustani Covenant Church in India. We went interested in water purification and storage but were exposed to many agricultural projects.

While  we were in India we were able to see the meaningful impact that agricultural development made in communities’ lives. We were able to see how certain methods and approaches could be economically and socially transformative and how well that correlated to the Gospel.We met several farmers who had been destitute and on the brink of losing everything. Through training that the Hindustani Covenant Church provided, these farmers were able turn their lives around; they could provide for their families and were so successful that they were able to hire on neighbors to help work their farms. Seeing this had a major impact on us. Gardening and growing plants had been a love of mine (Erik) and the results of these projects were incredible. There is a quote by Fredrick Buechner that says “The place God calls you to is the place where your deep gladness and the world’s deep hunger meet.” In this case it was literally the world’s hunger and our love for growing food. It is something that excites me and is easy for me to get other people excited about. We pursued more training in community development and got more education in agricultural development through a 15 week training program in Florida. The program was specifically meant for missionaries hoping to work in developing countries. Our classes included: animal husbandry, small scale organic farming, appropriate technology, nutrition and primary health. During that program it became very clear that cultivating was something I was skilled at and loved doing. 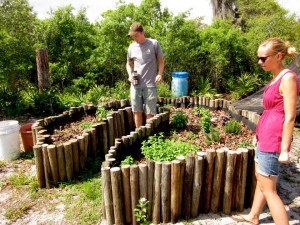 In our keyhole garden at the HEART Institute in FL

Eventually we began looking at the different possibilities of projects that the Covenant had going. We felt strongly that we wanted to join an existing project to learn from people who have more experience than us. As a result of our ability to speak Spanish we also felt that Latin America was a good place to start. It seemed that Ecuador had the most happening agriculturally and through a series of “divine coincidences” and encouragement from friends we decided to visit Ecuador again to see for ourselves the work that God is doing through His Church there.