Hi! We are Erik and Kristina Amundsen, and we are excited to be going to Ecuador with Covenant World Mission. 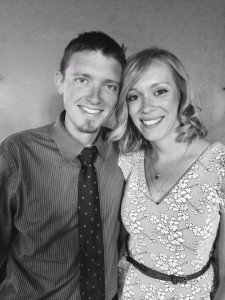 But first, here is a little bit about us from the very beginning:

Kristina (Husby) was born in the US to parents Dave and Ronna, but moved to Japan with them shortly after her first birthday. There she grew up as a missionary kid with her two younger sisters and enjoyed her childhood exploring what it meant to be a Third Culture Kid. In junior high and high school, she began to travel outside of North America and Asia, and had opportunities to experience even more cultures. This began to confirm her love of diversity and seeing God’s Kingdom represented all over the world.

Erik was born in Washington, but since 3 years old has lived in the northwest suburbs of Chicago. Because of his parents’ longtime work with Covenant World Mission, he had early exposure to missionaries and international guests. During his junior year of high school he accompanied his dad on a trip to Asia, which was his first time out of the US and also the first time he and Kristina met! They spent a short weekend together at a retreat and began a casual friendship.

Both Erik and Kristina decided separately to attend Covenant Bible College in Ecuador for a one-year discipleship program after high school and it was there that their friendship strengthened and they both really enjoyed the international context of their setting. Both of them made an extra effort to invest in the local community and improve their Spanish language skills (which they both began studying in high school- yes, even Kristina in Japan!). Their classmates and CBC community were an integral part of their experience in Ecuador, but there was something about the country itself and a few of the national friends that they had that made the year extra special to them both.

After CBC they spent two years apart- Kristina in Seattle and Erik in Chicago but remained close friends and kept in touch. Kristina had more opportunities to travel in Asia and Erik took a couple of extended trips to Europe and South America. Both of them also visited Ecuador again, but on separate occasions. Then in the summer of 2007 Kristina transferred to North Park University where Erik and some other friends attended and at the beginning of the spring semester they began dating. For the next couple of years they focused on their studies and strengthened their relationship. They each had the opportunity to study abroad- Erik to Ecuador/Argentina and Kristina to Mexico and ended up with Global Studies and Spanish majors as they graduated from North Park in 2009.

In September of 2009 Erik and Kristina became engaged and began to dream about their life together. A wonderful wedding celebration was held on July 31, 2010 in Seattle, WA among many loved ones, and after a relaxing and adventurous honeymoon in Japan (including climbing Mt. Fuji!), they returned to Chicago to a garden apartment and began their journey of discovering God’s will for their life as a couple.