When the city (Eneo) power goes out — like last night during a storm — we have a back up generator at school. Living right next to the school, our hostels (and a few houses) are also connected to the generator. It’s great to have electricity in the evenings. And it’s essential that school has electricity during the days.

Thankfully Eneo power returned a few hours later… but not everywhere. A few of the buildings were still without power. Ron and the guys determined there had been a short in the lines somewhere and spent the afternoon working on it. This is the point where those still without power start wondering how long the food in fridges and freezers will survive.

Thanks to some engineering know-how and skilled workers, (the guys who are working on the UBAC renovation) they got it figured out. Power was restored to all the houses for a little bit, and then went out again. Ok you’ll have to ask Ron exactly what the deal was, but they had to do some more work reconnecting all the wires. 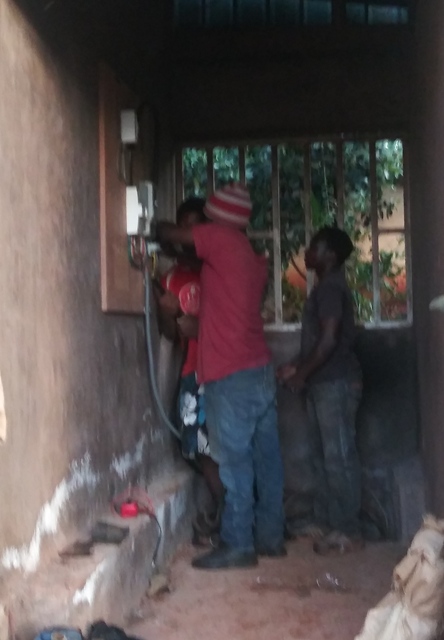 And within minutes – and just before dark – they got it all sorted out and voila! There was light!

We are thankful to be on city power, and that all our houses and the school are electrified again. Now, tomorrow Ron gets to tackle the generator and try to see if it’s fixable or really dead. Maybe it’s time to buy a backup to the back up generator!