Friday the 19th January was a very busy day for Ron and the guys working on the gym construction project. The big crane came for the last time.

With the trusses all raised into position for the gym roof, Ron had one more thing for the big crane to do before calling it a day. Move the PE container up to the soccer field. It houses soccer equipment anyway, and will need to be moved from its present location soon anyhow.

The crane got into position, attached a chain to the container, and began its work hoisting the container onto its truck bed. 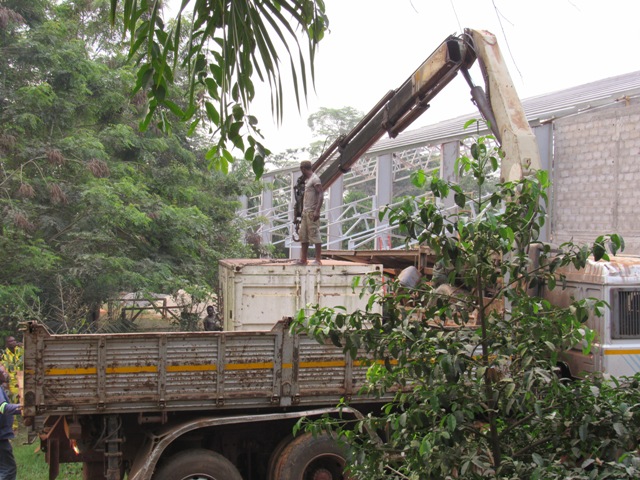 It took a bit of work to slide it out from under the roof of the construction shed. And then with help from a few guys turning it in mid air, the container was set down on the truck ready for transport a few hundred yards away to the soccer field. 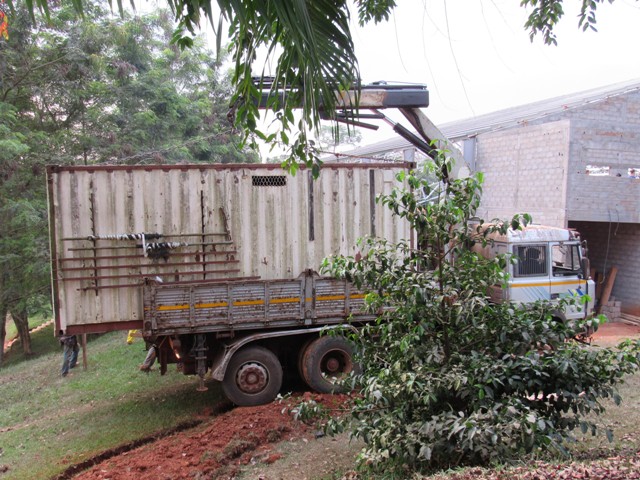 However, as the crane operator was securing the crane for transport, suddenly there was a pop and spray of liquid coming from a hose on the crane. Oops. That was bad. I was sure they’d all go home and finish the job the next day, but they insisted on fixing the problem and completing the job before days end, even if it meant working in the dark… which happens around 6 to 6:30 pm here.

Meanwhile, Ron, I’d said, “The container is the back wall of the construction shed. What are you going to do about that?” Not news to him, of course, he replied, “Oh, we’ll have to build a new wall.” I was amazed at how quickly, before the container had even been put on the truck, guys started appearing with sheets of plywood that seemed to come from nowhere (at least I hadn’t noticed it anywhere before), and nailed them to the gaping hole left in the shed.

By this time everyone had left (except Worship Team who was having a retreat that night in the auditorium and were having supper). So I decided to call it quits and go home. Ron went back later to oversee the offloading of the container in its new location on the soccer field. So the next morning I took this picture, so you all know where the PE container lives now.

It was a long day with a couple of unplanned fixes that took extra time, but they got 3 major things done, made good use of the crane that was rented for the day. And again, we’re so thankful to God for protection from injuries while moving huge heavy things. Thanks to all who prayed us through this very busy day in the gym construction project.