January 3, 4 and 5 big progress happened on the gym construction. The biggest crate yet came to lift the trusses up on top of the support beams.

The workers on scaffolding helped the tabs fit into the slots like a giant erector set Ron used to play with as a kid. And then the welders went to work welding them in place.

Once the 2nd truss was up, climbers attached angle iron cross bars to stabilize them.

In case you were worried, Ron did equip the climbers with harnesses and straps to secure them to the trusses while up there.

On the 2nd day the crane operator pulled the truss rather than lift it, causing it to break. That complicated things.

It’s hard to see how it’s broken, but a closer look at the very top peak reveals a split

Unable to bypass this one leaving a gap, consequent trusses had to move up to a new position. So that meant having to spin one of them 180*

You’d be surprised how fragile these huge hunks of metal look suspended in the air, flexing and bending!

When all the trusses were up (except the broken one) on the 3rd day the climbers began to screw in purlins to which the roofing sheets will eventually be attached. 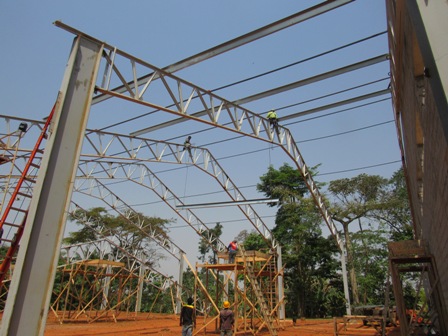 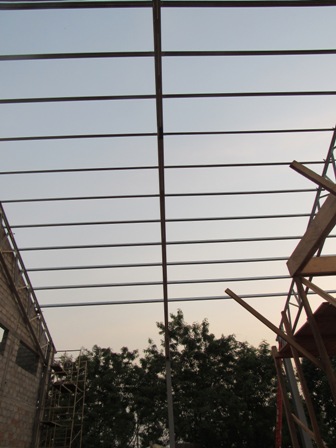 The broken truss now repaired, waits for the next time the crane will come to lift it up on the last set of beams.

The crane will come again when these trusses are ready to attach to the side of the gym where spectator seating will be.

The project has been covered in prayer and it is evident that prayers for safety, wisdom, and resources are being answered regularly. 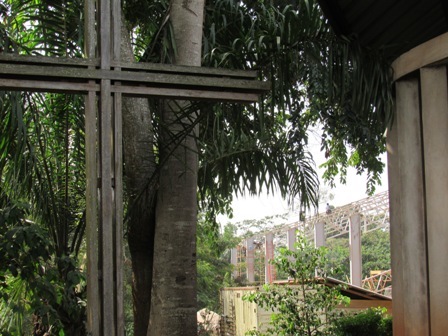