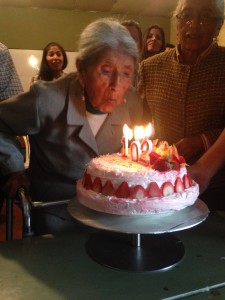 Eleven years ago we had the privilege of meeting Santos Felisa Quisaguano Troya, the great grandmother of our godson. A few weeks ago we were lucky enough to be able to attend her 102nd birthday. She is still very lucid and aware of what is happening around her. She remembers dates and times and can tell you stories of past celebrations and how the world has changed in her lifetime. She was born before the first World War, the world has advanced (for better, or for worse) in leaps and bounds during her 37,230+ days on earth.

The adobe walls of her kitchen are stained black from decades of cooking over a fire on the floor in her kitchen. From the ceiling hangs baskets which hold food to keep it safe from animals. 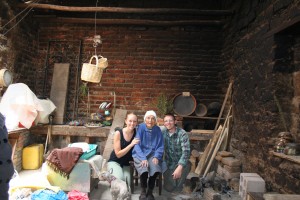 All around the kitchen are bowls and baskets of grain being dried to cook or to plant. She allowed us to take  some of her seed potatoes that were saved from last season to plant again just before the rainy season- just like she has done since she was young; just as her parents did since they were young. Although the houses surrounding her are modern, her kitchen with dirt floors remains as it has been, stocked with firewood, and lit by the sun. A memorial to the way life was 100 years ago.

“My husband was strong. Twelve years ago right after all the festivities of Holy Week he died. He just wasn’t here anymore. I sleep alone now. I pass the time here alone.” As she spoke about her late husband she began to cry. “I have 6 children still living; all of them are married and busy people. I don’t know how much time I have left- how much time God has given me before I rest in peace, but I thank him for the time I have had.”

On the occasion of Day of the Dead we were able to attend mass with Mamita Feliza and then go to the graveyard to share a meal at her husband’s grave. 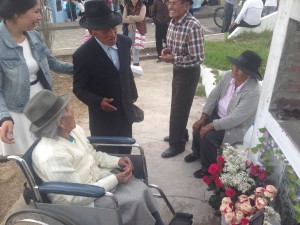 Her name literally means happy. Even though she has lived through the death of children, her husband, and many friends, Mamita Feliza still laughs and eats well and will drink beer on holidays. Her family has been very special to us and have welcomed us as family here in Ecuador in the absence of our own families. 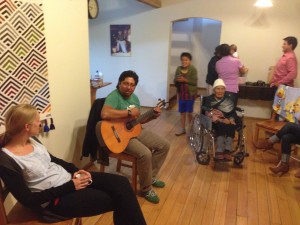 One thought on “Mamita Feliza turns 102”