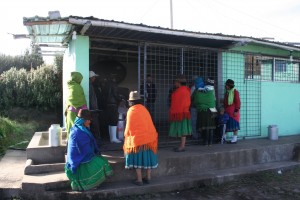 Participating community members drop off their milk at dawn at the collection center where the refrigeration tank is.

One of the projects that we have been working with that excites us most is the Dairy Co-op in a rural community called Lote 3. The community has only a few hundred inhabitants and sits in the rolling mountainside well above 10,000 feet. The nights are very cold and the days are mild. Although most people speak some Spanish, the preferred language is their local Kichwa. The women still dress in traditional bright colors and practice many of the indigenous traditions. The men often wear knee high rubber work boots, a heavy shirt and a hat. Most families have a few milk cows and almost all arable land is planted with leeks. Meat is a special treat and many of the children struggle with malnutrition.

Until recently, many of the families were able to produce more milk than they needed but there was no one to sell it to or no money to buy it with. The Covenant Church of Ecuador began talking with the community about ways to improve the quality of life for the people of Lote 3. Together they developed a plan to start a milk co-op. All interested members of the community were invited to participate. Through the help of a grant from Covenant World Relief, the local government, and the work of the people in Lote 3 they were able to obtain a refrigeration tank and the necessary infrastructure and materials to gather and store milk for several days. With a greater quantity of milk they were able to negotiate with a milk company to come out and pick up their milk every 2 to 3 days and to pay a fair price for what they were able to produce. 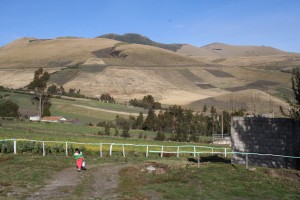 A girl arriving to drop off her family’s milk.

The community of Lote 3 now wants to help one of their neighboring communities create a similar milk co-op and want to take their own milk production to the next level by creating cheese and yogurt as well as improving the pastures and health of their livestock to increase their milk output.

A building will need to be constructed, materials purchased, a small laboratory built, and relatively expensive machinery needs to be purchased in able to pasteurize and process milk to be able to make cheese. We have been helping FACE and Lote 3 with a grant proposal to Covenant World Relief and to the local government to help cover the expenses of this next step of community development.

This past week we just received word that our grant proposal had been approved! On Wednesday we were able to go with one of our co-workers to a community meeting in Lote 3 to let them know that the funding for their project had been approved. They were very happy (in a typical reserved, stoic, Kichwa fashion) and immediately made plans to begin work the next morning to make their dream a reality. One of the members of the neighboring community where the next milk co-op will be established shared about how other foundations had come to their community with empty promises and had gotten their hopes up and that they were very happy to see this project become a reality.

After the meeting we were invited to join the pastor for a meal of roasted guinea pig and boiled potatoes. It is very encouraging to us to be able to see the fruits of a successful project now blossoming into its second stage and also the people that it has helped wanting to pass on their knowledge and experiences to another community. 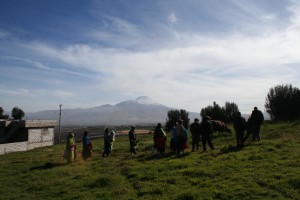 Visiting a neighboring plot of land where cows graze on ever-improving grass. That is the majestic Cayambe mountain on the horizon.