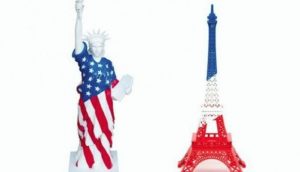 In preparation for our big move on September 3rd, I’ve been trying to get my French grammar up a bit so I can test into a level that is closer to my speaking ability. That way, hopefully, I’ll test into the highest level I can and move forward from there (rather than be put back to a lower level to work on my grammar).

I’ve also been open to learning about differences between French and American cultures even though I know there’s no book that can truly solve the cultural misunderstandings. I must dive in! But I’m enjoying the book my cousin gave me recently. She was a French Literature major.

Carroll is a French ethnologist living in the United States.

In the first half of the book, this is what I’ve learned so far. His premise is basically how to avoid some of the misunderstandings that take place between the two cultures. He has interviewed thousands of people, French and Americans living in either country, and tries to get at why they both can perceive one another as rude, arrogant, impolite, with terrible manners. He works through different aspects of life and shows the differences.

1) Home – Right away one can see that French homes are very private, covered by a row of tall bushes and gates, so that people walking by cannot see in. But American homes have lawns that can be wide open, all the way to the street. The blinds and curtains can be open at night and a person walking by can easily see in their home, something that is quite uncomfortable for the average French person.

When inviting someone to their home for dinner, a French couple expects that the guests will stay in just a few rooms and not wander into the rest of the home. But often, the first thing an American will do is show a guest their entire house so they can feel “at home”. The author shares a story of a French couple having an American couple over and when the French man went to go get a book, the American followed right behind him, surprising (to say the least) the French man. And when the French woman went into the kitchen to get the food, she was shocked that the American woman was right on her heels, ready to help.

Students who visit France from the U.S. are surprised when the host or hostess will go in their room without their permission or make them a meal without talking to them. Students who visit the U.S. from France are surprised to find that Americans don’t have a system like “pension” where someone rents a room and receives meals with the rent. There can either be a “too relaxed” atmosphere where the student is treated as a part of the family or a “too distant” atmosphere where the family cooks for themselves, but doesn’t share with the student, expecting him or her to make his/her own food. 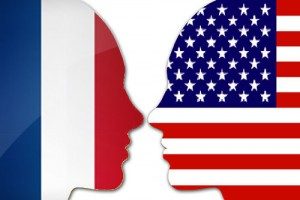 2) Conversation – I learned a lot in this chapter because I did not know there were misunderstandings in how the two cultures converse. The basic difference is explained saying that Americans use conversation to create distance while the French use it to create closeness. For instance, the author shares that French people can perceive Americans as talking without saying anything important or “just to hear themselves talk”. They can perceive American conversation as slow, boring, and with cues to follow such as letting the person finish their story before anyone interjects or they will be thought of as interrupting. They can’t understand how Americans can talk to complete strangers about anything at the grocery store or waiting for a hair appointment. French conversation is much more about creating connection and they don’t “waste” it on just anyone. If they don’t know you, they will ignore you, unless you are the owner of a shop or there is some reason they need to speak to you. Americans perceive French as rude and distant while French perceive Americans as over-talkative and way too open. It’s fascinating and while I’m sure I can learn to adjust a bit, I know that part of my culture is so engrained in me, it will take time and intentionality to learn the subtleties and cues of the culture.

3) Parents and children – As with just about any other culture I’ve been exposed to, French and American cultures have clashes when it comes to raising children. This is actually one of my biggest concerns about taking our girls outside a culture we are familiar with (either Brazilian or American) and raising them elsewhere. I had this concern in Japan and could see that if we had stayed there, I would have come across plenty of challenging situations where the values of each culture are in stark contrast to one another. This will likely be true at times in French culture – there’s no way to avoid it. The “shock” for Americans, according to the author’s research, tend to be thinking that French parents don’t let their children be kids. They buy them clothes that are uncomfortable and can’t be played in or gotten dirty. They keep them on a “tight leash”, walking them to school, seeming to be overprotective and over involved in their lives. French people perceive Americans as letting their kids do whatever they want, running in the street without shoes on, being loud and interrupting their adult conversations, etc. I can relate to this because, being married to a Brazilian, we often see a clash in the way we were raised. I was taught that independence was important for development and falling down was to teach kids balance. He was taught to be their protector, behind them all the time, involved in every aspect of their lives. Let’s see how it plays out in France!  Who will our friends be and which culture will they come from? How will we continue to be true to our parenting styles in a culture that may view “politeness” and “proper childrearing” in a very different light?

This entry was posted in Project Lyon, Uncategorized. Bookmark the permalink.