We worked with five different groups of people: Brazilian-Japanese, Latinos-Japanese, Foreigners, Japanese and Japanese with international tendencies and Japanese with global-mindset (Japanese people who have lived abroad and speak English/ Portuguese/ Spanish or French) for two years. 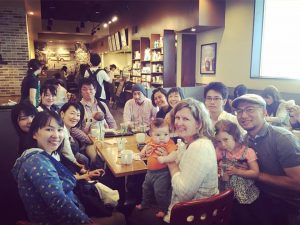 Our ministry was developed once we got there and focused on Christian Education and Evangelism. We preached, played concerts in churches, led family seminars in English, Portuguese and Spanish. We also led multi-cultural gatherings, language exchanges, French/ Spanish/ English and Portuguese conversation groups to serve our community in Fujisawa and developed friendships to live out the simplicity of the Gospel through our actions, words, service and daily routine as individuals and as a family. For example, Fabio got together with Brazilian professional soccer players once a week to talk about life in Japan and study the book of John in Yokohama. Johnna developed several activities with Japanese moms and kids. We both observed how powerful is to be together as family with one child (and later, two) and had several opportunities to get close to other families because of the value the society places on children and the elderly.