Stories from across the border 2

When Roy & Luke & Leanne & Kim & Rose-Marie arrived to the small town on the Cameroon side of the river, they were welcomed to a lovely guesthouse at a Catholic mission there.  Five leaders from Gamboula came across the river to have a meeting; to give our group an idea of how things really were going and whether it would be okay to visit. 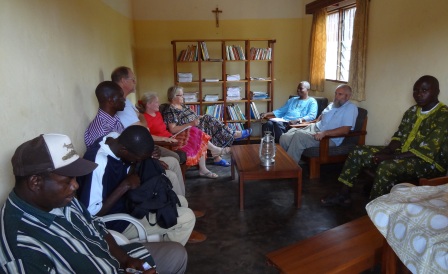 The reports were positive.  Our region was the shining example, angel protected, amongst all the regions in the country.  Peace was reigning, and no violence or looting had taken place since that very first day.  Schools were in session, the hospital was running, things were as if we had never left.  Our group made the decision to cross, and had amiable encounters with the new forces in control.  They were pleased to find that most of the people previously in charge, like the commissioner of police and the commander of the local armed forces, were back in their places.  Aside from finding the peaceful atmosphere, the reunions with friends and colleagues were definitely the highlights of the visit! 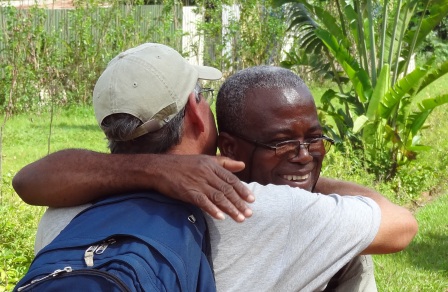 Roy with Benoit Z, the ag director.  Benoit Z has had a stressful time, unwilling to stay at home because of his position as director of a prosperous NGO.  Please pray for him and his family!