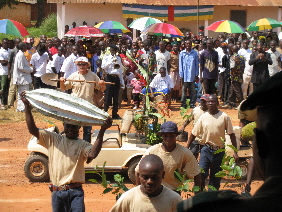 Today we celebrated Independance Day in C.A.R. There was a parade, complete with many many many marching school children, clowns dressed up as pillow padded beggars acting drunk and dancing lewdly, our hospital crew dressed in scrubs on top of a truck performing a C-section on a mannekin – they delivered a baby complete with placenta to the cheers of the crowd. Boy, was that a hit! There was a karate club, a young girls’ dancing club, and a bunch of motorcyclists that performed along the way. The ag project led by Roy in his golf cart, came along with bizarre fruits and nuts and flowers to present to the mayor and governor etc. In the absence of bands, the parade marched to the accompaniment of a bugle (the man in the white shirt in the background of the photo) and a few drums. You can see one drum player next to the man with the bugle. It was long, but fun to watch once the actual parade got under way.

As Covenant missionaries, we are working with all the tribal groups of the Central African Republic (CAR) but are trying to give special attention to the Fulani, a Musxlim, cattle herding, and semi-nomadic people group. We live on an experimental/training farm, near a mission station which has a hospital plus bible and nursing schools. We are establishing relationships with the local people groups through compassion ministries; Roy through agriculture and Aleta through public health and visitation, in order, ultimately, to share the good news of Jesus the Messiah with them. CAR is one of the least developed countries in the world and is currently in continual crisis (since the coup in March 2013), so reaching out in compassion is key to reaching their hearts. Due to the ongoing conflict and resultant ethnic cleansing in CAR, we are crossing the border to interact with our Fulani contacts.
View all posts by danforth →
This entry was posted in Ceremonies & church happenings. Bookmark the permalink.