elections and a church of the poor

“We are a poor church, so most of us will hope that the candidate that knows the poor and has the interests for the poor in their mind and policies will  be elected. The other candidates come from a small higher-class. Their future is secure, financially, now they want the power too. The higher-classes feel like they have been marginalized. Yet, they do not know what it is like for the majority of the country. They do not know what true marginalization is. They have made a lot of money, but that doesn’t mean they will help the situation of the poor.” 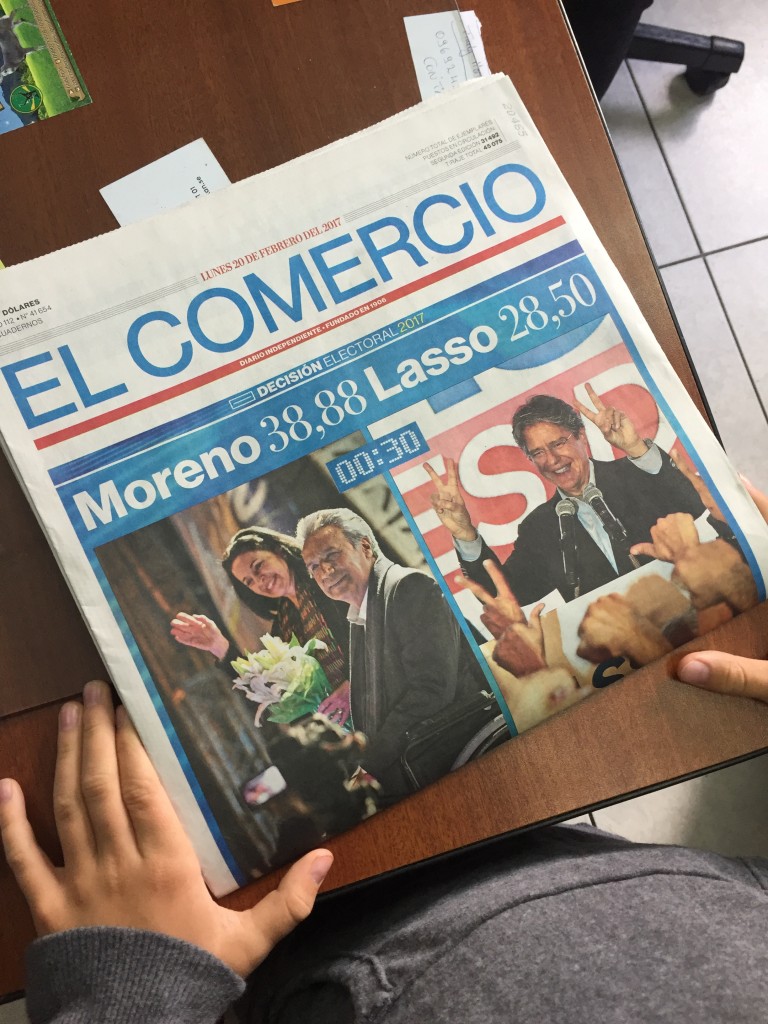 We had asked who most Covenanters here in Ecuador voted for. The above response was what we assumed, but was confirmed the day after the inconclusive election results in our conversation. In the Ecuadorian electoral system a candidate must receive 40% of the votes, and 10 more points than the closest rival. Differing exit-polls had the entire nation waiting for the official results, with protests being held by the opposition parties. Wednesday the National Electoral Commission (CNE) revealed no candidate reached the required amount, and a second round of voting will take place this spring, in which different parties will try to unite to achieve the needed percentage.

This idea of a poor church, a church that is made up of a variety of people from a variety of social strata, yet identifies itself, as the early church did, with the poor and marginalized, had me pondering. Who do we identify with? Our own country of origen has been through an extremely contentious and polarizing election. Both candidates have been accused of having no idea what it is like to struggle pay-check to pay-check…or no pay-check. Both have expansive business connections. In short, like many of the candidates in Ecuador, “their future is secure.” Both candidates talked at length about “middle-class,” but little mention of the poor.  Mr. Trump did talk about “inner-city” issues, which are outdated and seem to ignore the issues cities have had the last twenty years in gentrification, rising housing costs, and discriminatory housing practices when businesses “brining jobs to the cities.”  His attempt simply confirmed he was out of touch and uninformed about urban poverty. His appeal to new trade deals at least recognized that large communities that used to produce are no longer able to offer the same steady work that was once reliable. We pray that proposed renegotiations benefit not simply workers and labor in the United States, but workers everywhere affected by these large trade deals.

Our Savior and King was a day-laborer and craftsman from a part of Palestine greatly influenced by borders and international (or intra-imperial) trade. People from all strata of life could relate to him, quite simply because he lived and moved amongst them. There is a greek word that comes up a lot in the New Testament that I am fascinated with: ὁ ὀχλος (ha oklas), the crowd. Who were these people? We know there was at least one boy who planned ahead (or his mom did) and came with some fish and bread. We know there was an extremely sick and shamed woman. We know there were at least two despised collaborators and tax-collectors. Plenty of smelly fishermen. Plenty of sex workers. Plenty of poor.

The majority of the Palestinian population, both Samaritan and Jewish, were under heavy occupation and economic exploitation by the Roman government. Few leaders knew what it was like for the crowd. That’s why the Pharisees and Zealots were popular. They were with the people rather than collaborate with a wealthy and corrupt leadership. Jesus of Nazareth comes in and people are equally attracted to him. He is wise, like an educated Rabbi, yet tells folksy stories that people relate to. He walks or sails on fishing boats everywhere, except once, right before he is arrested. He gathers grain in the fields, a practice reserved for the poor and wandering. ὁ ὀχλος. The crowd. Who do we identify with? Who would we say makes up our church? Are we willing to cross lines and really try to understand what life is like for ὁ ὀχλος? If we come from such a place, are we willing to believe and trust that our God knows what life is like for us?

Regardless of the outcome in the elections here in Ecuador, we are praying for a smooth transition. The outgoing president, Rafael Correa, is the only democratically-elected leader to serve a full-term since our return to democracy here in 1979. Whether Ecuadorians agree with his methods in poverty reduction, education and tax reform, antagonistic relationship with the press or international relations, it is hard to find anyone who has been disappointed in stability. So we continue to pray for stability and transition for this nation and its people.

We have watched the poverty levels fall over the last several years, yet the majority of the population is still underemployed. The church here is cognizant of the limits of human power and politics. She recognizes that systems are at play and limit the agency of the poor in seeking justice and change. Yet she also recognizes that there is a Kingdom that we belong to, which calls us to be an alternative and radical community. A community that works tirelessly to see our society reflect the values and concerns of God and his kingdom. The church here continues to hope, pray, and work, like ὁ ὀχλος in Palestine, for transformation, justice, and life for all.