Flexibility is a new skill I have had to acquire. Not in the sense of being physically flexible, but in the sense of being open to change. I have always been a planner. I like to put things on calendars and have a sense of how my day is going to go. I still do those things here in Colombia, but I have learned that more than likely there will be days when what I have planned will need to be tweaked or changed. It’s definitely a growing edge for me, even after 7+ years of living cross-culturally. Still, I am learning to go with the flow and trust God when even my best designed plans don’t work out.

Saturday I was once again reminded that flexibility is key. I was reminded that even if things don’t go as we plan, God is still present and good things can happen. It was noon and I was getting ready to go out the door to my boys’ swim lessons when I got a call from a friend on the children’s ministry regional committee. We were having a training/seminar that afternoon at 2pm with the children’s ministry leaders in Medellin and it had been on the schedule for months. Well, my friend had some unfortunate news as the professional who was going to be leading the seminar just let him know that she would not be able to make it. My heart sank. I thought of all the people that were giving of their time and money to be a part of the training and I started to get anxious. My friend assured me that he was working on something to share with the group. I took a deep breath and offered the situation up to God.

After the boys swimming lessons we rushed off to the church, getting there just in time to hand over the cookies I’d made and get the kids settled in the Sunday school room with a toys and a video. Well, the dvd player decided not to work and as I went to look for some other activities I saw one of the participants crying and visibly shaken. I went up to her and found out that a man had attempted to mug her as she was walking to the church and he pushed her down on the ground, bruising her wrist and putting a nasty gash in her thumb. I gave her a hug, helped her sit down and then ran across the street to the convenience store to buy a bar of soap and some bandaids. As the workshop got underway, two members of the organizing committee explained the change of plans and then beautifully led in a time of sharing from God’s word, prayer and dialouge about the relationship between church and family in the formation of children. 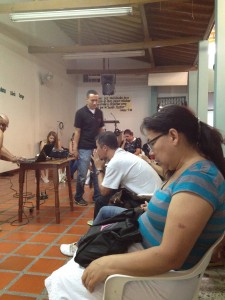 The afternoon did not start out as we planned, but God’s Spirit was present. As one friend led in a time of prayer, a woman in the group shared that she and her children had just left her husband because of a long history of abuse and the group came around her and prayed for her. Another participant shared that he had just received word of a cousin who was seriously ill and the group prayed for him. We talked about the vulnerable situation that children in Colombia and around the world are facing and the utter necessity the church has to respond. We were encouraged, we learned from one another, we learned from God’s word, and we experienced a real sense of unity in our call to love children and support families. I’m thankful for my friends who were able to jump in and lead without much of an advanced warning and for the opportunity to see God take control of the situation.