This story about “Mia”, a tsunami survivor, has come from our missionaries serving in Japan, Stephen and Soo Bay.  Her name has been changed and her photo omitted to protect Mia who has been persecuted (beaten; two ribs broken) for her faith.

She was on the balcony of her second-floor apartment when the flood waters rushed in, 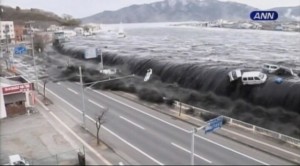 all the way up to the ceiling. She cleaved to a post for dear life until the waters subsided, then collapsed from exhaustion afterwards and lay unconscious for hours. Mia was later rescued by firefighters and taken to the hospital. Her home destroyed, she was relocated to a cramped temporary housing unit, where she has lived for over three years now.

Lina, one of the Ofunato base staffers, would visit her every now and then, and in December 2013, Mia professed her faith in Christ! No one expected this, as she hadn’t seemed very interested in matters of faith. (Lesson learned: don’t judge a person based on outside appearance.)

Lina and I have had the joy and privilege of visiting her almost every week, offering a listening ear, praying with her, and coaching her along as she learns more about Jesus. It’s been one of the highlights of our ministry times in Ofunato, as we literally get to watch her being transformed before our very eyes. She’s a very different person today than she was six months ago.

A few months ago, Mia was stressed about her application to move out of temporary housing and into a new apartment. There were more applicants than available units, so she was terribly worried that she might not get one. We assured her that if God wanted her to get one of these apartments, she would, and if she didn’t, God would provide something better later on. We went over scriptures such as Phil. 4:6-7 and Matt. 6:25-34, which she read intently, and encouraged her to pray more and not stress over this.

Several weeks later, she told us that after that meeting, she surrendered the apartment situation to God, and to her surprise, her application had been approved! We celebrated by taking her to Burger Hearts (pictured), an Ofunato institution that Mia used to frequent before the disaster of March 11, 2011 disrupted her life, along with the lives of countless others throughout Northeastern Japan.

I believe that the LORD has great plans for both Mia and Lina. We are extremely thankful to be here for such a time as this, and we are ever grateful to you for your prayers and partnership with us in this ministry.