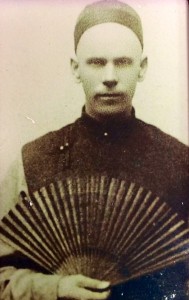 tson (1868-1943) was the beloved pioneer missionary of the Evangelical Covenant Church who gave fifty years of his life proclaiming the goodness of God to the Chinese. In his early twenties, Peter was given a vision for God’s people in far regions and a passion burned within him for those who did not know Jesus Christ as Lord and Savior. Struggling to understand how God would use an uneducated farmhand, Peter kept believing. The following is his personal testimony of the guidance he received to know God’s will:

“My daily prayer had been that the Lord should reveal his will, as my sincere desire was to do his will, no matter where it led me. Never shall I forget the hour when the decisive step was taken. It was at haying time in the summer – the day’s work was done and I was all alone in the meadow. There the Lord spoke to me and led me into a covenant with himself. There and then I promised that I would willingly go to whatever field he might indicate, or else, if for any reason he would have me stay at home, I would give half of my income to foreign missions. That hour behind the haystack I look upon as one of the momentous experiences of my life.”  (“Peter Matson: Covenant Pathfinder in China,” p.27-28)

God continued to open doors and make clear the path, for just a year later, Peter set forth to study the Word of God under David Nyvall and was soon ordained as a Covenant Missionary in 1890. The very next month, Peter set sail to China from San Francisco, with ready endeavor and passionate zeal.

After meeting with Hudson Taylor in Shanghai in March 1891, Peter began to tour Asia, seeking God’s calling to a particular people and place. During one of his stays, cholera ransacked a village and rumors spread like fire that he had poisoned the wells and caused the epidemic. The community turned against him as he found himself in the dangerous hands of an angry mob who cried “Kill him, kill him! Beat the foreign devil!” and attempted to silence their scapegoat with bricks and stones. He claimed it a miracle of God that he got away and others attended to him.

But where there was danger, Peter also knew there was opportunity. He knew that in the midst of prejudice and hostility, God could reconcile the Chinese to himself. He knew that hardship after hardship, God continued to be ever-present and faithfully at work. 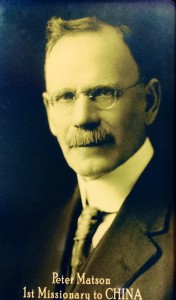 In his autobiography published in the 1934 Covenant Weekly, he stated that “experiences like these put the missionary’s faith and zeal to a severe test. Yet in spite of opposition, the work of preaching the gospel, in season and out of season, was carried on. As people got to know us, doors were opened. Great was our joy when we had the privilege of baptizing the first converts. The seed sown had not been in vain. We praised God and took courage.”

As Peter boarded a ferry to return to the United States for the last time in 1940, his wife, Edla Matson, captured the legacy of Peter’s ministry with these powerful words: “Fifty years had passed since Peter Matson had come up that same river, as a youth of twenty-two. His heart was burning then with a holy flame, kindled by the Lord of missions. That flame had never burned low but had increased with the years for the people to whom God had sent him. Fifty years he had attempted great things for God & God had granted him to see great things take place. The Chinese people had become a part of himself, and he of them. For he had suffered and had anguished in prayer. For them he had spent and had been spent. Often he had soared on wings of joy and hope. Most often he had run as a messenger of God’s love amidst hardship and trial, yet the constraining love of Jesus Christ had kept him unwearied. In days of discouragement, he had walked by faith with the Lord who had promised never to leave him, and had not fainted. His presence had undergirded Peter Matson through fifty years in China with faith, hope, and the greatest of His gifts, love. God had wrought mighty things through the faithful ministry of the nestor of Covenant missions in China, and to him alone would Peter Matson give the glory.”

Faithfully obedient, burning with zeal, anguishing in prayer, unselfish in labor, Peter reaped a fruitful harvest as he followed Jesus Christ. When God called, Peter promised that he would go wherever God led him, and this promise has been repeated in the hearts and minds of hundreds of missionaries throughout the ages. Today, the Covenant continues to see God expand His kingdom throughout Asia. Will you pray with us that Asians continue to experience the transforming power of the Gospel?