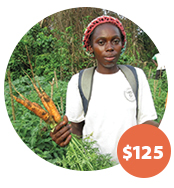 Bernard Bekosso is a mover and a shaker wherever he calls home. He and his wife, Sidoni, raised a large family in a village not too far from the farm where Covenant missionaries, Roy and Aleta Danforth, live, in the Central African Republic (or C.A.R.). In the early days of their ministry, Roy had done an agroforestry seminar in Bernard’s village on raising fruit trees along with a training session on reaching the Fulani Muslims for Christ. Though the Fulani only comprise barely 10% of C.A.R.’s population, these cattle herders had made Bernard’s village their home and were a much larger percentage of the population than normal. Bernard has not only been an elder in the church, he has always had an evangelist’s heart for reaching the Fulani for Christ. When Roy met him long ago, he had a sewing shop and was teaching the Fulani the sewing trade and witnessing to them at the same time. It was amazing to see the fellowship and respect that the Fulani people had for Bernard and his family. After the agroforestry seminar, Bernard jumped at the opportunity to start his own personal orchard of fruit trees. But it was not long before he not only started up a group of tree planters; he helped form 6 other village agroforestry co-ops. Soon these co-ops were harvesting and eating many different kinds of fruits from all over the world.

More recently, in 2010, CEFA or the Center for Experimentation and Formation in Agriculture was born as a result of farmers near and far requesting lessons on how to take care of themselves and have a better life. CEFA does research on both new species and new methods of raising plants and animals. Even though Bernard had already had planted over 1000 fruit trees, he wanted to learn more about what CEFA had to offer! Not only did he connect with CEFA, he engaged even more villagers in his area with new crops and animals. Again, his heart was truly with helping the Fulani, not only in sewing and agriculture, but he continued to share with the Fulani through Arabic script Fulfulde bible books and also audio bible stories.. As the ag program in that village grew and the need for food security heightened, it was perfect timing for the Covenant Cares program to swing into action. Shovels, machetes, and sharpening files, hoes, rakes, and watering cans were distributed.  Vegetable seeds, bean seeds, and fruit tree seedlings were supplied to the interested family co-ops for planting. Not only were the Fulani and other tribal groups making vegetable gardens, bean fields, and planting fruit trees, they were also digging fish ponds and making chicken coops! As Bernard developed closer relationship with the Fulani through agriculture and sewing, he would tell of many wanting to learn more about Jesus. He has told us that he knows of a few men and women that he is sure are silent believers! Bernard and his wife’s seed planting efforts were coming into fruition, both physically and spiritually.

However, life changed drastically for the Bekosso family in March of 2013. Muslim Seleka rebels successfully took over the country and reigned in C.A.R. for about 10 months before militia resistance rose up and forced all the Fulani and other Muslims out of the country. There was bloodshed on both sides, between Muslims and non-Muslims. The hatred and bloodshed was intense. Though the town near the Danforths’ mission home did not experience the violence the rest of the country did, Bernard, his family, and his whole village had to flee death and destruction into neighboring Cameroon. CEFA’s village visits had to temporarily stop. Close to a half a million Central Africans, mostly Muslim, ended up fleeing and re-establishing themselves in neighboring Cameroon in refugee camps. Many of the people from Bernard’s village chose to settle across the river border in Cameroon, staying together, Muslim and non-Muslim.  As they realized that they wouldn’t be able to return soon, they began building homes and planting new gardens. CEFA then moved into action and helped them with seed to plant and tools to work with, again with the help of Covenant Cares. During the last year and a half CEFA has helped not only this small group, but also hundreds of refugees and displaced families in both C.A.R. and Cameroon, in getting food security back. In addition, Bernard, with his big heart of wanting to reach the Fulani, not only set up a new sewing shop for Fulani to learn how to sew, but he has helped 7 ag co-ops get started! Through our travels and visits to his village, we were able to not just visit this amazing home away from home, but also bring Covenant Cares’ seed and tools to the seven co-ops and give advice on raising fruit trees, beans, and vegetables. On top of that, we were able to supply Bernard with more bible books for the Fulani to read. The fields will soon be ripe for harvest in more ways than one!

Then finally, even though recently Bernard lost his oldest son to the fighting in C.A.R., he is hopeful that one day he, his family, and his Fulani friends will be able to return to their home in C.A.R.  He knows his former country is a long way from reconciliation, but I can think of no better way to achieve that reconciliation than being salt and light like Bernard amongst his friends, both Muslim and Christian, as they live together in peace and work together towards fighting hunger and malnutrition, using the tools and seed provided through the Covenant Cares program. Useko! (Thank you from the Fulani) and Merci! (Thank you from Bernard and his family).

To support this project or other Covenant Cares projects, say a prayer and make a gift here: www.covchurch.org/covcares