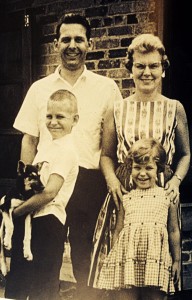 In 1965, North Park University’s Carlson Tower was dedicated in loving memory to Paul Carlson, a medical missionary to Congo from 1962-1964. Within its foyer hangs a plaque that commemorates his legacy with these words:

Doctor Paul E. Carlson, or Monganga Paul as he was known by the Congolese to whom he gave his life, came to North Park University in 1948 as a student with a quiet conviction to serve as a medical missionary. After gaining his M.D. degree in 1956, Dr. Carlson began a surgical career. When an opportunity arose to go overseas to the Republic of Congo for a brief period in 1961, he remembered his early aspirations. Almost immediately he fell in love with the people and the people with him. Soon after, the president of the Evangelical Church of the Ubangi asked him if he would return as a permanent missionary doctor.

In 1962, Dr. Carlson, his wife Lois, and their young son (Wayne Paul) and infant daughter (Lynette) left everything they considered home and moved to an understaffed hospital in Wasolo, a remote town in northern Congo. When asked why he became a doctor and traveled so far, Dr. Carlson answered, “Here there are so many to do the work – over there so few.” His presence was felt immediately. Despite the overwhelming responsibility for as many as 200 patients a day, he remained thankful to be there.

In 1964, four years after the Congo gained its independence, armed dissidents started roving through the country. While Dr. Carlson sent his family across the border to greater safety, he himself returned to Wasolo to continue the work he felt compelled to do. It was in the midst of surgery that Dr. Carlson was captured and two nurses he worked with were shot dead. During his three month long imprisonment, he constantly placed the welfare of others before his own and ministered healing as he could. In captivity, he constantly heard the threats of his execution and came to anticipate his own death, writing: 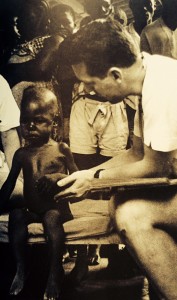 “For me to live and die is gain – this becomes more real each day. I’ve had beatings and known what it means not to know the future for tomorrow. Where I go from here I know not, only that it will be with Him. If by God’s grace I live, which I doubt, it will be to His glory…I can only realize when I see such difficulties as we have seen that we need to work all the harder for our Lord. I’m praying that through this we might see revival in our churches in the Ubangi, in the hearts of all of us, and our Congolese brothers too.”

On November 24, 1964, in the midst of a military attempt to rescue him, his captors led Dr. Carlson and his fellow prisoners out into the yard. In the confusion, some prisoners were killed while others fled. At age 36, Dr. Carlson was shot while attempting to escape over a wall, inches from safety. Although having lived in the Congo for just over two years, his body was buried there among the people he loved. 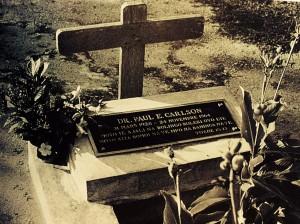 Dr. Carlson was not alone in his death. Several other missionaries, priests, and businessmen, both Congolese and foreigners alike, lost their lives during the tragedy. He did not suffer more than many of the Congolese with whom he served. The then-governor of the Ubangi Province in the Congo wrote his wife Lois, “I am able to assure you that the sacrifice of your husband will not have been in vain. In fact, the grave where he rests in a village of our Province will remain always as a reminder to us that in the midst of the hatred and violence that troubled our Congo, a man willingly gave himself to die for an idea of peace, love, and brotherhood.”