The World Cup “CopaMundial” has begun! This year Ecuador made it to this month-long, world-wide competition, it’s been said that this is the biggest sporting event in the world! For us that means that Ecuador is decked out in supportive yellow, blue and red. The team colors are used to advertise at car dealerships, checkout lanes in super markets are marked on jerseys, flags are stuck on cars and basically the whole country is standing up and showing support and pride of their team.

For those of you North Americans who don’t know much about the World Cup culture (that was me too) here is how I describe it:  Super Bowl meets March Madness meets World Series. But we are talking the best soccer teams in the WORLD competing about three times a day for an entire emotionally charged month. The hype and all-consuming enthusiasm is amazing.

Yesterday (Sunday) was Ecuador vs. Switzerland. Our church leaders had deliberated in a long conversation about what to do with the 11am game which also coincided with Father’s Day. Have church as normal? Do a special Father’s Day service? Have church early? Watch the game as a congregation? It was a serious discussion. Eventually they reached a decision: serve an easy breakfast, have an early Father’s Day themed service, watch the game together, amen.

As you can see many showed up already wearing jerseys in preparation for the game. 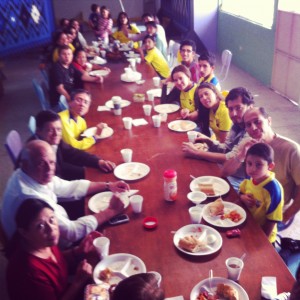 The church service was short and sweet. 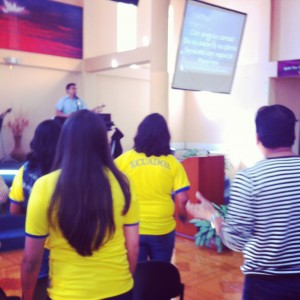 Then we returned to the all purpose room to watch the game! 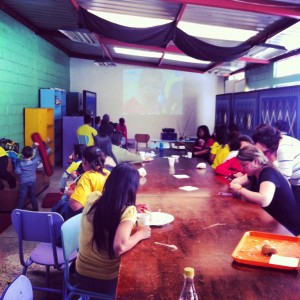 Then the men rigged a big screen to watch the game on.

Screaming teens, intense grandmas, serious men….. then when Ecuador scored the first goal: screaming, jumping dancing, hugging celebrating!!!! Sadly the game went downhill from there and Ecuador ended up loosing 2-1 to Switzerland, resulting in lots of sad faces on the edge of crying and just a general disappointment. But this Friday, June 20th Ecuador plays Honduras. I speak for all of us when we say we are hoping for a win! 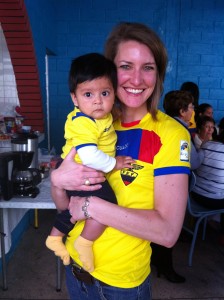 Getting some snuggle time with the cutest little fan.