The church was full, the music was lively and the rain stayed away from Grace Baptist Church this morning. 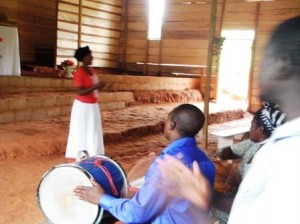 Worship with singing, drums and dancingSinging to greet visitors to the church. 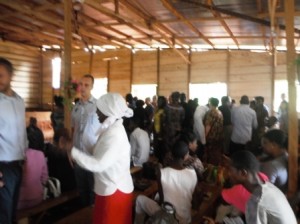 Singing to greet visitors to the church.

This Sunday morning was dedicated to learning about the work of CABTAL (Cameroon Association for Bible Translation And Literacy).  CABTAL is involved in about 25 translation and literacy projects within Cameroon according to their spokesman.  The  challenge is that  Cameroon has over 270 distinct languages and more than 100 of them have no portion of the bible in their language.  And many of those that have some portion of the scriptures in their language have only a small portion of it – very few have the full bible. 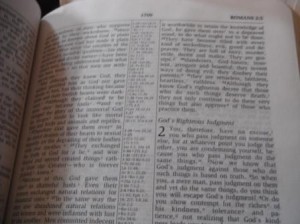 A bible in English - this is my heart language.

It is true that many people read either French or English in Cameroon.  So at a first glance it would seem that translation into all the languages of Cameroon is not really necessary.  But as the speaker related, even a well educated pastor, on hearing a portion from Matthew 18 read in his mother tongue,(on which he had preached numerous times)  found himself moved and understood deep within him something new.  The reality is that the language that speaks to our heart is that which we know best and in which we think and dream.  For the Bible to speak deeply into our lives we must understand it with our heart. 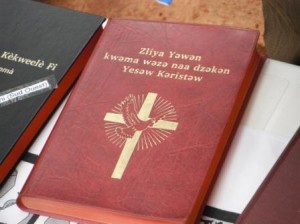 New testament in the heart language of a few of those in Cameroon.

The speaker went on to talk about how the Word of God in our heart language can change us to the core – change our very nature.  His example was a comparision between a pig and a cat.  He stated that a pig can be washed and cleaned, made to smell beautiful, but its nature is to go roll in the mud and as soon as it has the chance it will do this.  No matter how spruced up the outside is the nature and inclinations of a pig are still present.  A cat on the other hand has a different nature.  It cleans itself constantly.  When exposed to the dirty world it will not allow the filth to remain on its coat but instead will lick itself clean.  It is like the person whose nature has been changed so they no longer are drawn to the “dirt” but instead clean themselves regularly.  His point was that the Word of God in our heart language has the power to change our nature from that of a pig (desiring mud) to that of a cat (desiring cleanliness). 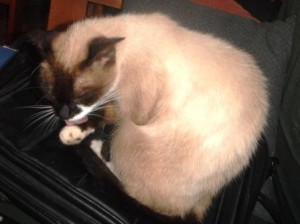 To be a like a cat - desiring by nature to be clean.

I am not sure that we care to pick up all the habits of a cat – but the desire to be clean (as opposed to corrupt) is one that resonates with me.  It  has been exciting to be in Cameroon for these past 13 years to see the progress made in bringing God’s Word to the people of Cameroon in their heart languages. 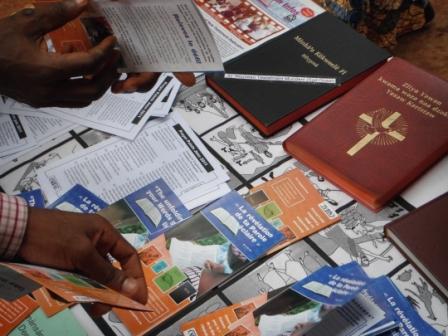 The projects of CABTAL - getting the Word of God into the heart language of the People of Cameroon.