When we were first married, Roy worked on a construction/maintenance crew with the L.A. Flood Control District.  I was in nursing school and he was taking college courses at night, working like a dog full time during the day.  His crew did grunt work like road and field clean-up, but the true gift of that 2 year stint was that he learned all sorts of skills.  He worked with a master mason, a master plumber, and learned how to properly set a fence.  He was the newby on the team, so they had no reservations about giving him the worst of the work requests, such as hanging from a dam in a bosun’s chair/sling to paint spillway plumbing, climbing trees to use a chainsaw, or getting into an 18″ crawlspace under a house and running a jackhammer…  He even was able to spend some time in the office, helping with bookkeeping and running the ham radio.  God knew that ALL these skills would come in handy in Africa.  Because of this background, one of the things he knows enough about to do a level, good job, is masonry.  He has been involved in the construction of too many buildings to count over the years.  This one is just for fun and family: making our kids BBQ chimney taller so the roofing over the patio can cover more area. 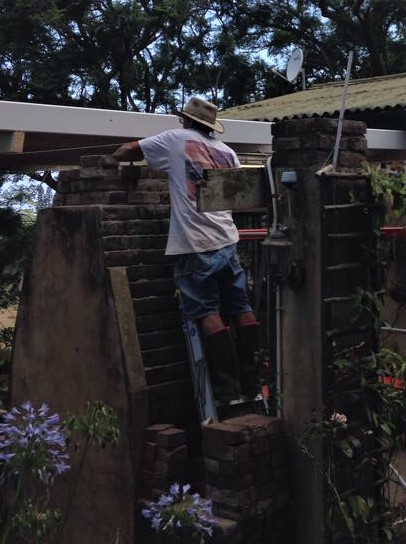 We’ll see how the construction of the new building on the CEFA farm has gone when we get back there in a month or two.  It is in Luke Turk’s very capable hands, and Roy is thankful to have colleagues to help out in his absence.

As Covenant missionaries, we are working with all the tribal groups of the Central African Republic (CAR) but are trying to give special attention to the Fulani, a Musxlim, cattle herding, and semi-nomadic people group. We live on an experimental/training farm, near a mission station which has a hospital plus bible and nursing schools. We are establishing relationships with the local people groups through compassion ministries; Roy through agriculture and Aleta through public health and visitation, in order, ultimately, to share the good news of Jesus the Messiah with them. CAR is one of the least developed countries in the world and is currently in continual crisis (since the coup in March 2013), so reaching out in compassion is key to reaching their hearts. Due to the ongoing conflict and resultant ethnic cleansing in CAR, we are crossing the border to interact with our Fulani contacts.
View all posts by danforth →
This entry was posted in Family & Friends, Ministry. Bookmark the permalink.