Words of thanks from our colleague, Kim 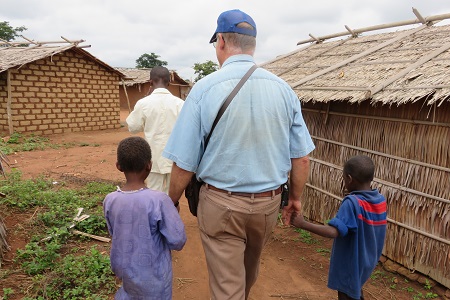 Today, I did Luke 8 with a friend.  I say “did” in that I did not read it myself as before.  Instead, I used a radio that will accept SD cards.  The Fulfulde is so perfectly “clean” as the Fulani would say.  But not only that, the producers stick in sound effects.  As the pigs went rushing over the cliff, you could literally hear them squealing in the background!  When the demoniac responded to Jesus asking for his name, it was indeed a “Legion” of many voices that answered altogether!  Upon Jesus entering Jairus’ house, you could hear the mourners in the background, an eminently familiar sound in Africa!  But in a few moments, the weeping turned to laughter!  Absolutely amazing!

I cannot adequately praise those who work in “vernacular media” ministries!  What they do in a confined area somewhere is literally being played before all the various peoples of this world!  I would guess that some from every single ethnic group on earth have now seen the “Jesus Film” in some language that they understand.  For these to hear, it takes TEAM WORK!  (1) Those who meticulously sweat the details to make and edit the recordings, trying their best to time the speech to the movement of the lips on the screen, (2) and those on the ground, taking media in 4-wheel-drives, on motorcycles, on bicycles and on foot to the most remote parts of this globe.  And then the magic happens!  They get to hear Jesus speak in a crystal-clear fashion in their own tongues!  As I write, I’m weeping for joy.  It is like witnessing a miracle to see it happen live.  At this critical juncture in missions, vernacular media ministries are absolutely vital to the overall picture!  Let’s not forget to pray for these intrepid geeks when we pray for those on the field showing the films or passing out the SD cards.  Neither can accomplish much without the other.

Awed by what God is doing through others,

As Covenant missionaries, we are working with all the tribal groups of the Central African Republic (CAR) but are trying to give special attention to the Fulani, a Musxlim, cattle herding, and semi-nomadic people group. We live on an experimental/training farm, near a mission station which has a hospital plus bible and nursing schools. We are establishing relationships with the local people groups through compassion ministries; Roy through agriculture and Aleta through public health and visitation, in order, ultimately, to share the good news of Jesus the Messiah with them. CAR is one of the least developed countries in the world and is currently in continual crisis (since the coup in March 2013), so reaching out in compassion is key to reaching their hearts. Due to the ongoing conflict and resultant ethnic cleansing in CAR, we are crossing the border to interact with our Fulani contacts.
View all posts by danforth →
This entry was posted in Fulani/M friends. Bookmark the permalink.