Thankful for a delayed flight!

We were travelling back to S. Africa from Beira, Mozambique, and we had to collect our bags from the international terminal and check them in to our domestic flight within S. Africa.  The flight was late getting in to Joburg, so we needed to rush to check in.  As we ran up to the baggage carousel from our flight, we saw 3 suitcases and no one else around.  One suitcase was Aleta’s blue one, one was a pink one which definitely wasn’t ours, and one was a shrink-wrapped dark suitcase that we assumed was Roy’s.  He had decided to have his suitcase wrapped in Mozambique, just for kicks.  We grabbed the 2 suitcases and took off, running, pausing just to rip off the tags before we got to the check-in.  We were in line for boarding our flight when the announcement came that our flight from Joburg to Durban would be delayed.  Shortly after hearing that, we received a phone call from the Mozambique flight’s airlines that we had picked up someone else’s bag!!!  Thanks to VERY helpful airline personnel from both companies, we were able to get whoever’s suitcase off our plane and our suitcase checked on.  The agent dealing with our true suitcase actually walked our bag from the international terminal over to domestic and checked it in for us.  The agent at our departure gate arranged for me to walk down to the tarmac to identify the bag which wasn’t ours.  So there we were, the only people in line that evening that were grateful for a delayed flight. 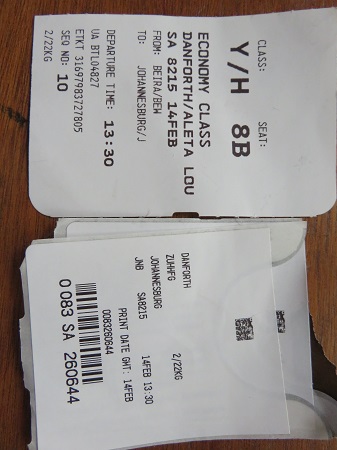 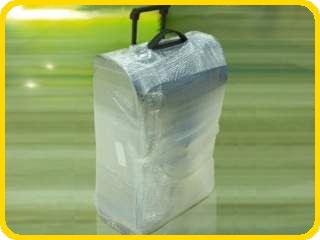 This isn’t actually our suitcase, but you can see how easy it would be to grab the wrong one, right?  Right??!?  I guess we’ll check the baggage stickers from now on, even if we’re convinced it’s our bag!