It’s been a crazy month.  We got the internet going for the whole station in January with new parts, then after a February big bad windy rainstorm complete with hail, the hospital lost their connection.  It took me (Aleta), the one person Gamboula nerd herd (thank you Josh Shinar for taking the time to teach me at least some basics!) a longer time than it would have taken a true IT nerd, but I got the hospital back online with the help of some guys doing the dirty work of climbing around in the attics at the hospital.  Oh how I love to see those little green lights!! 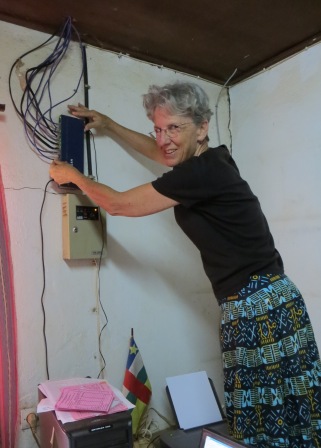 Then, the WHOLE internet went down again, about the time the water pump out at the CEFA farm died.  Thanks to friends across the river, we bought and received a new pump and got water running again in record time.  For the internet, a newly programmed modem is on its way with Swedish friends soon, but in the meantime I found that a troublesome power cord was the reason for the internet being off.  I was beginning to get discouraged with all these technical problems, but I had to laugh at myself, this is just stuff!  We have more than one dear friend right now battling cancer, we live in a country in conflict where death happens too frequently, and we have so many friends who don’t know the Savior’s love for them.  What’s a little internet frustration in light of all that??? 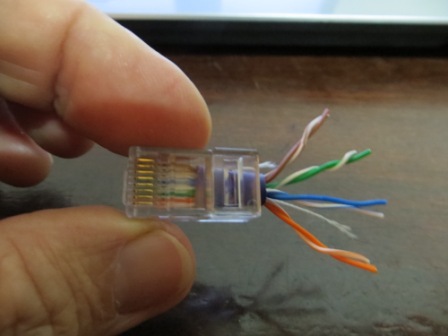 Okay, so why do we have to take those 4 pairs of wires, untwist them and put them in a different order in a neat row and place them securely in the little clip?  I dunno, I just do it because Josh Shinar told me to.  I found that this clip was a problem – its colors are not in the right order so the internet was not getting through.

As Covenant missionaries, we are working with all the tribal groups of the Central African Republic (CAR) but are trying to give special attention to the Fulani, a Musxlim, cattle herding, and semi-nomadic people group. We live on an experimental/training farm, near a mission station which has a hospital plus bible and nursing schools. We are establishing relationships with the local people groups through compassion ministries; Roy through agriculture and Aleta through public health and visitation, in order, ultimately, to share the good news of Jesus the Messiah with them. CAR is one of the least developed countries in the world and is currently in continual crisis (since the coup in March 2013), so reaching out in compassion is key to reaching their hearts. Due to the ongoing conflict and resultant ethnic cleansing in CAR, we are crossing the border to interact with our Fulani contacts.
View all posts by danforth →
This entry was posted in Mission, Whatever. Bookmark the permalink.